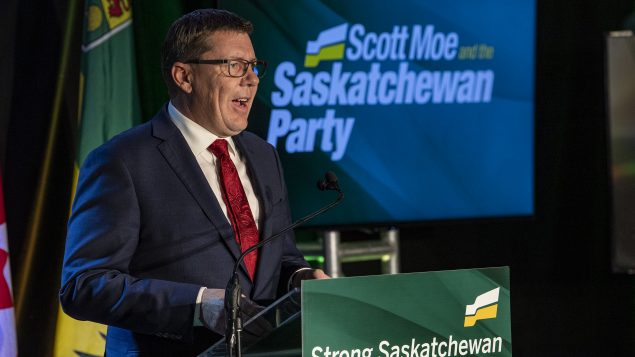 With thousands of mail-in ballots still to be tallied, the centre-right party led by Scott Moe is projected to secure 50 seats, leaving the opposition left-wing New Democrats with just 11.

Moe was re-elected in his rural electoral district in central Saskatchewan, while NDP Leader Ryan Meili was in a fight to retain his seat in Saskatoon. Meili was 83 votes behind the Saskatchewan Party’s Rylund Hunter with about 1,600 mail-in ballots still to be counted in coming days.

“This has been an election like no other in our lifetimes,” Moe said in his victory speech, moments after Meili conceded the election in his own speech.

Moe said he is humbled by the win and vowed to work on behalf of everyone in the province.

“We are eager to build a strong economy, strong communities, strong families and a strong Saskatchewan for everyone,” the 47-year-old leader said.

“I look forward to continue working with Premier Moe and the government of Saskatchewan as we keep fighting the global COVID-19 pandemic and build a more resilient Canada,” Trudeau said.

“At this critical point in the pandemic, we will continue to coordinate our efforts to minimize the impacts of the virus and support economic recovery for people and communities throughout Saskatchewan.”

The two leaders have clashed on the federal government’s policy of introducing a carbon tax, which is opposed by the energy-rich prairie province.

Speaking to supporters on Monday night, Moe said many of Saskatchewan voters used the provincial election to “express their frustration with the federal government.”