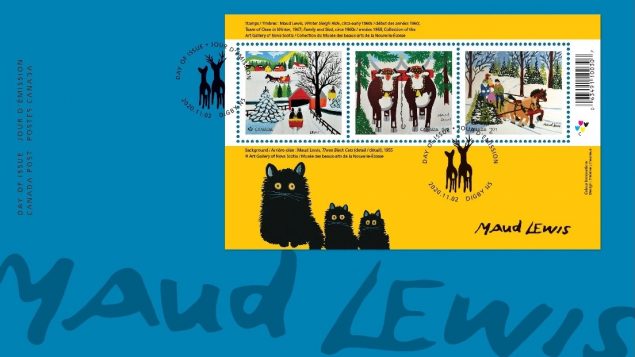 With the inexorable approach of winter, Canada Post celebrates the upcoming season and holidays with a new series of postage stamps.

The three stamp series features the work of Nova Scotia folk artist Maud Lewis. The works chosen for the seasonal stamps were painted by Lewis in the 1960s.

The three stamps will be valued one each for domestic letters, another for letters to the U.S. and a third for overseas mail. 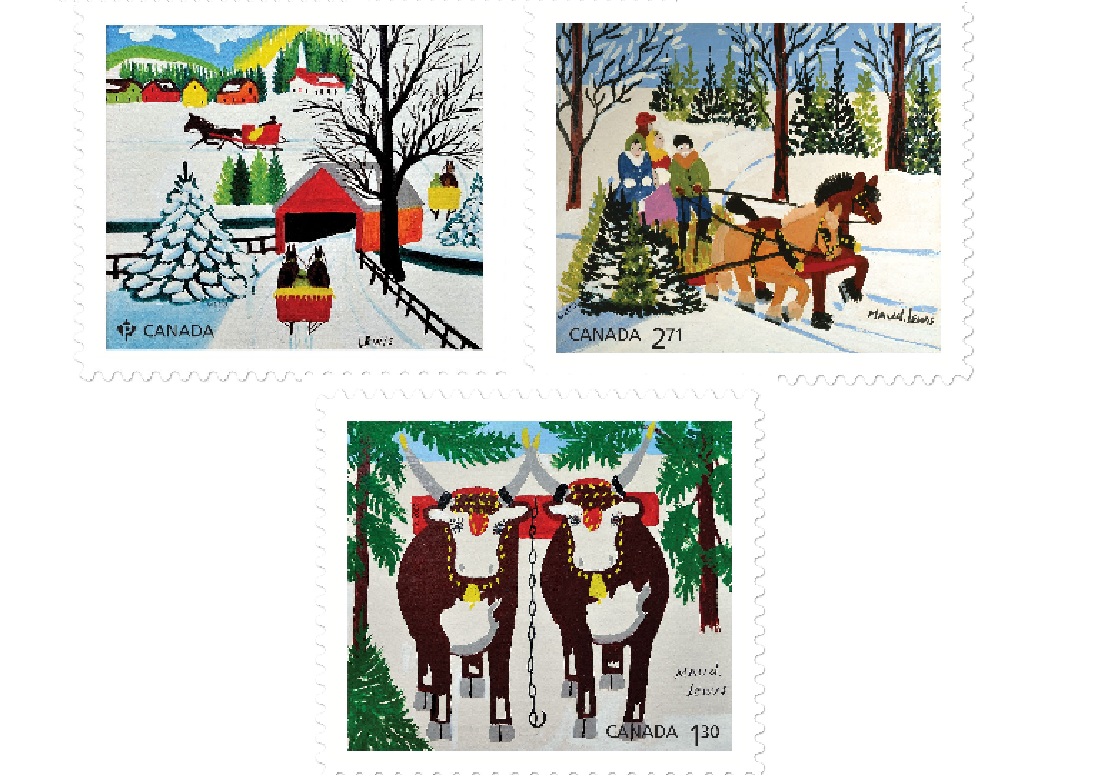 “Winter Sleigh Ride” upper left is for domestic rate; “Family and Sled” is for overseas mail, : Team of Oxen in Winter is for U.S. letters ( Canada Post)

The original works are owned by the Art Gallery of Nova Scotia. Encouraged by her mother, Lewis’ early works were for Christmas cards she painted and would sell door to door to her neighbours in Marshalltown, Digby County. 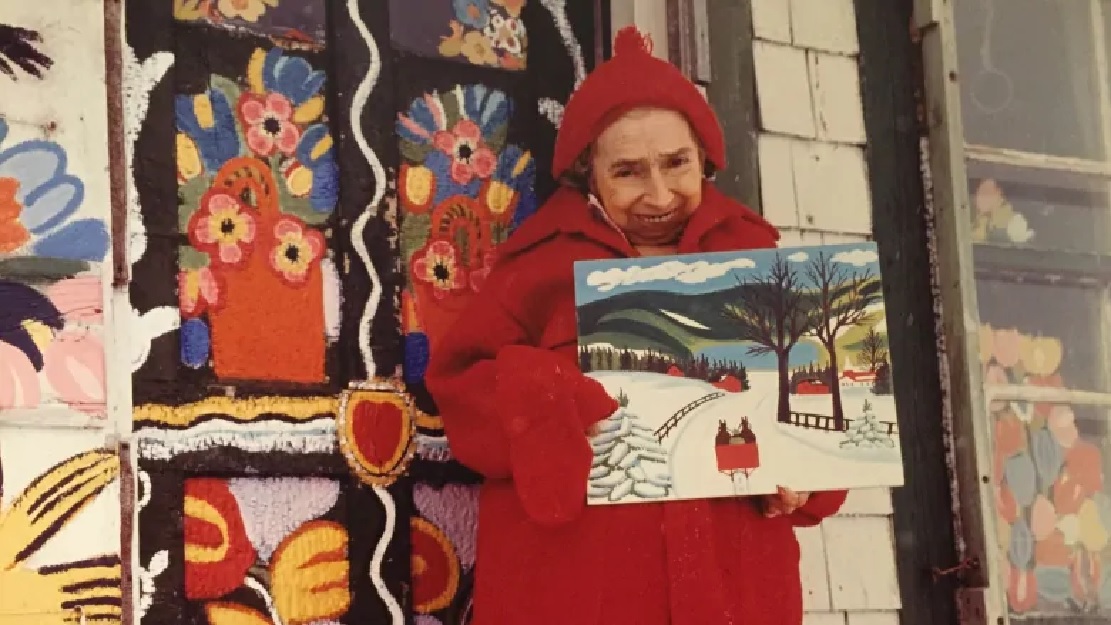 Maud Lewis outside her home, with one of her paintings. ( Art Gallery of Nova Scotia- via Radio-Canada)

Critics say her work helps to celebrate the simpler things in life. Jimmy MacAlpine, the retiring warden of the Municipality of the District of Digby, which Lewis called home, is quoted in the Halifax Chronicle-Herald saying “Although Maud faced many personal challenges, they never dampened her spirit for life,“In fact, they made her see the beauty around her, beauty she has shared with all of us through her incredible body of work… I am beyond grateful to Maud for capturing scenes of winter from this glorious part of the country.”

Maud Lewis suffered from rheumatoid arthritis from a young age and lived in poverty most of her life. 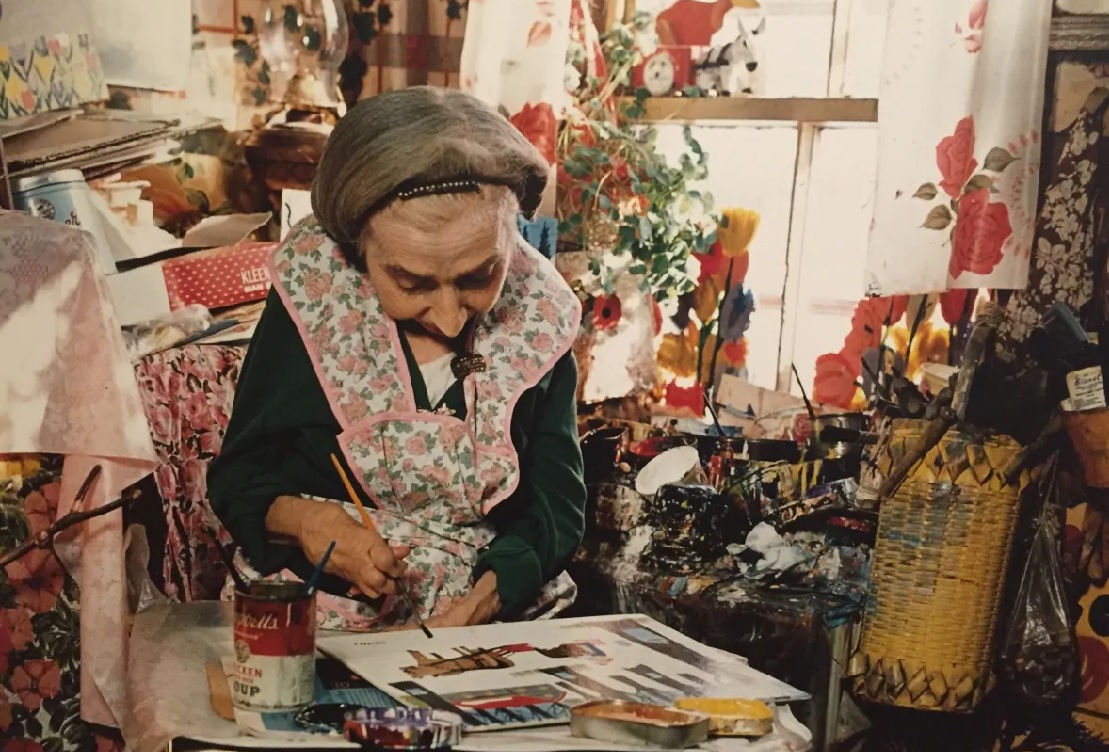 Her tiny house had no power or water, and the paints she used were from leftovers found by her husband.

In 2017, Sally Hawkins and Ethan Hawke starred in a feature film biopic “Maudie” that brought the Canadian artist’s life to the big screen. Two of her works were also bought by the White House during the presidency of Richard Nixon. 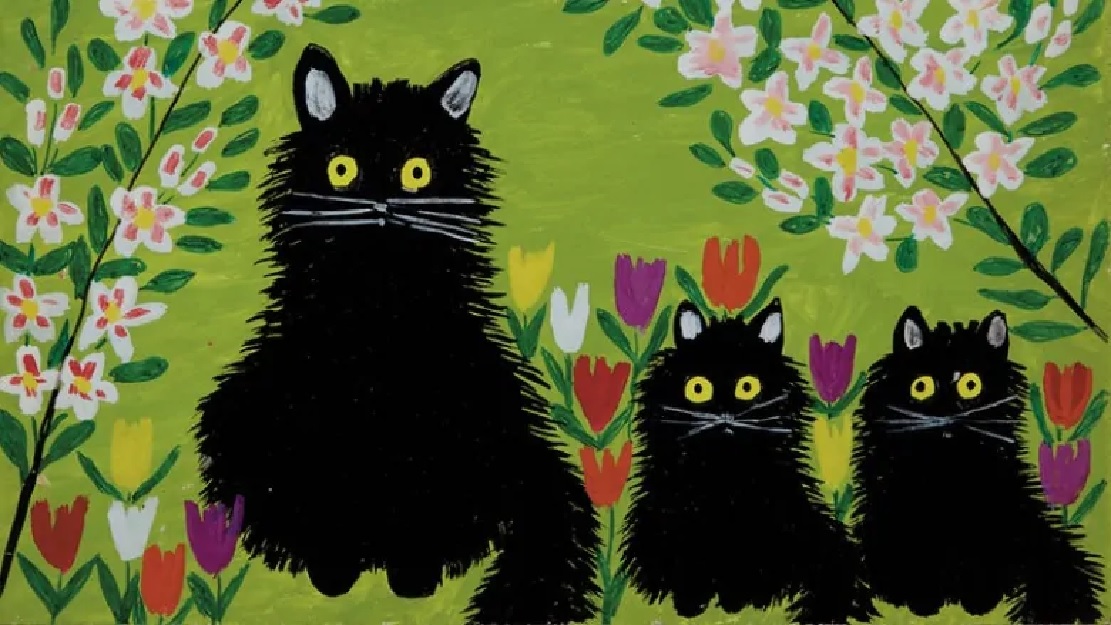 Lewis originally sold her paintings for a few dollars each, but they now fetch in the several thousands, In 2017 Portrait of Eddie Barnes and Ed Murphy, Lobster Fisherman, Bay View, Nova Scotia sold in an online auction for $46,000 while Three Black Cats sold the same year for $36,800.