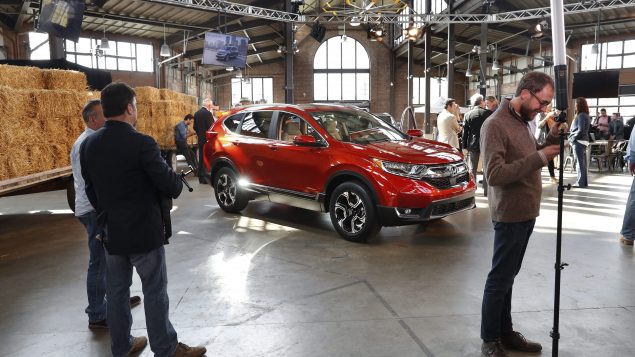 In this Wednesday, Oct. 12, 2016, photo, journalists view the 2017 Honda CR-V at a world debut event in Detroit. According to the Insurance Bureau of Canada, the 2018 model of Honda CR-V is the most stolen car in Canada in 2020. (Paul SancyaAP Photo)

The 2018 Honda CR-V SUV and trucks with remote starters top the list of the most often stolen vehicles in Canada, according to the Insurance Bureau of Canada.

Electronic auto theft is on the rise across the country as more vehicles are equipped with technology like keyless entry remotes, the group that represents Canadian private insurance companies said in a press release on Wednesday.

Bryan Gast, national director of investigative services at IBC, said in an interview with CBC News that the biggest trend he’s seeing this year is what’s known as a “relay attack.”

“That means they’re acquiring your signal from your key fob, cloning your key fob and [then] have the ability to start your vehicle without ever having the original key fob,” Gast told CBC News.

“It’s as simple as walking to your front door, seeing if they’re able to capture a signal of a key fob that might be inside. They don’t go anywhere in your house. They’re capturing it from the outside. And they have the ability to technologically clone the device and have the ability to start your car and drive off.”

Many high-end SUVs are stolen by organized crime groups for export, to be sold to unsuspecting consumers in Canada or to be stripped down for parts that are then sold, the IBC added.

The IBC suggests a number of tips for Canadians to help protect themselves from becoming a victim of auto theft.