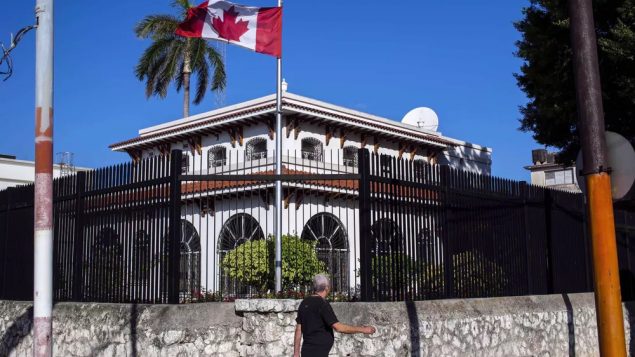 The Canadian embassy in Havana is seen in 2018. Both U.S and Canadian officials reported strange health symptoms somewhat similar to concussions starting in late 2016. (Canadian Press)

It was a mysterious illness that struck Canadian and U.S. diplomats and some family members last year while they were posted to Cuba. It became known as the “Havana syndrome”. People reported suffering from headaches, nausea, dizziness, difficulty concentrating and other symptoms beginning in late 2016. Some also reporting hearing a buzzing or high pitched sounds. Some American diplomats in China reported similar symptoms

U.S embassy staff were greatly reduced as a result but no-one was able to explain what was going on or why. Staffing at the Canadian embassy was reduced at a later date.

Investigations by officials were carried out but could not initially determine a cause. A Canadian report in September 2019 suggested that it may be the result of pesticides used to fumigate against mosquitoes. Concern over mosquitoes carrying the Zika virus was high at the time with a campaign of fumigation being carried out,

However, a new American study however suggests a more technological cause, that of “directed, pulsed radio frequency energy”.

The report from the U.S National Academies of Sciences, Engineering and Medicine (NAS) suggests in conclusion that, “After considering the information available to it and a set of possible mechanisms, the committee felt that many of the distinctive and acute signs, symptoms, and observations reported by state department employees are consistent with the effects of directed, pulsed radio frequency energy,”

No source of such possible energy, nor who may have been behind it was identified but the report noted that based on western and Soviet studies going back several decades indicate there is circumstantial evidence for the pulsed energy cause.

The report suggested that the U.S. should take several precautions against possible future situations like this  while noting, “Even though it (the committee) was not in a position to assess or comment on how these [Department of State] cases arose, such as a possible source of directed, pulsed RF energy and the exact circumstances of the putative exposures, the mere consideration of such a scenario raises grave concerns about a world with disinhibited malevolent actors and new tools for causing harm to others”,

It did not entirely rule out psychological and social factors as exacerbating or as possible contributions to the symptoms in some cases.

It did rule out the theory of pesticide contamination as the cause for the American diplomats, but did suggest that might also have contributed to the symptoms.