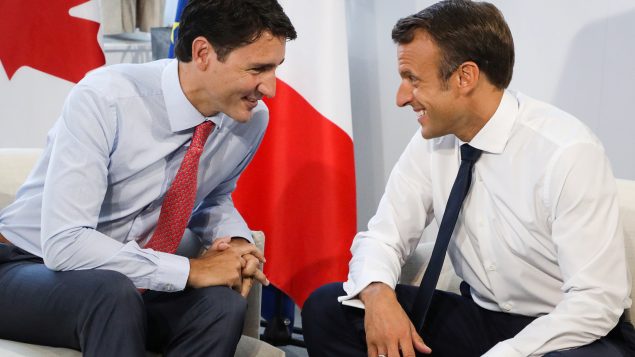 Prime Minister Justin Trudeau and French President Emmanuel Macron discussed on Wednesday the fight against the COVID-19 pandemic and vaccinations efforts in Canada and France as both countries face a surge in coronavirus infections.

Both Canada and France have authorized the use of Pfizer-BioNTech and Moderna vaccines and in both countries governments are facing criticism for the slow rollout of the vaccination campaign.

The two leaders also discussed the importance of international coordination in global health and economic responses to the pandemic, according to a readout of the phone call released by the Prime Minister’s Office on Thursday.

Trudeau and Macron also “highlighted the need for equitable access to vaccines” amid reports that the global scheme to deliver COVID-19 vaccines to poorer countries faces a “very high” risk of failure.”

The World Health Organization’s COVAX program aims to deliver at least 2 billion vaccine doses by the end of 2021 to cover 20 per cent of the most vulnerable people in 91 poor and middle-income countries, mostly in Africa, Asia and Latin America.

But in internal documents reviewed by Reuters, the scheme’s promoters say the programme is struggling from a lack of funds, supply risks and complex contractual arrangements which could make it impossible to achieve its goals, potentially leaving billions of people with no access to vaccines until as late as 2024.

Both Canada and France are major donors to the COVAX program: in September of 2020 Canada pledged $220 million through the COVAX Advance Market Commitment, promising to purchase vaccine doses for low- and middle-income countries.

The two leaders also discussed cooperating on international peace and security issues, and promoting democracy and human rights, including in the G7, the G20, and other multilateral forums, the readout said. 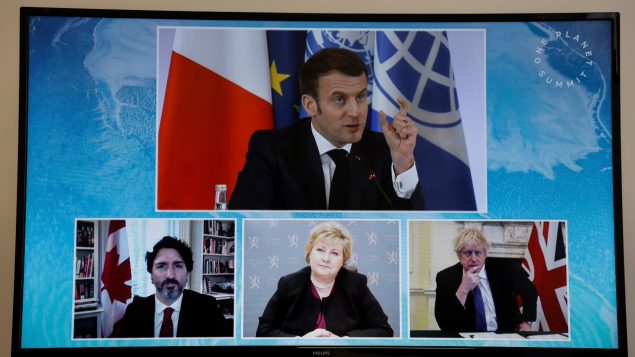 French President Emmanuel Macron, top, Canadian Prime Minister Justin Trudeau, left, Norwegian Prime Minister Erna Solberg, center, and Britain’s Prime Minister Boris Johnson, right, attend a video conference meeting during the One Planet Summit, at The Elysee Palace, in Paris, Monday Jan. 11, 2021. Protecting the world’s biodiversity is on the agenda for world leaders at the One Planet Summit, which was being held by videoconference due to the coronavirus pandemic. (Ludovic Marin/Pool Photo via AP)

Trudeau and Macron also spoke about fighting climate change and protecting the environment, and the success of the recent One Planet Summit for biodiversity, organized by France in cooperation with the United Nations and the World Bank.

Addressing the summit via video conference, Trudeau said Canada will contribute up to $55 million to the UN’s Land Degradation Neutrality Fund to support sustainable land projects in low and middle-income countries.

Trudeau and Macron also discussed relations with China, with the Canadian prime minister expressing concern about the human rights situation in Xinjiang and recent arrests in Hong Kong, the readout said.

The two leaders also discussed the continued instability in the Sahel region of Sub-Saharan Africa and international efforts to restore peace, stability, and prosperity in the region.