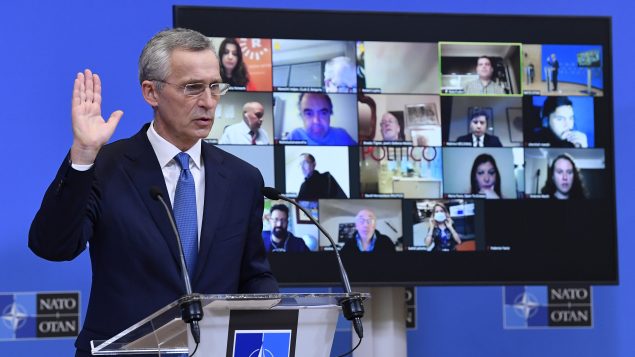 The future of NATO’s deployment in Afghanistan and Iraq are at the top of a two-day meeting of NATO defence ministers, including Canada’s Harjit Sajjan, that began Wednesday via secure teleconference link.

The virtual get together is also the first opportunity for most of the alliance’s 30 members to get acquainted with U.S. Defence Secretary Llyod Austin ahead of the NATO summit in Brussels later this year.

Ministers are also meeting with NATO partners Finland, Sweden, and the European Union to address security challenges along the alliance’s eastern flank: chief among them Russia, but also Belarus and war-torn Ukraine.

Todd Lane, a spokesman for Sajjan, said the Canadian defence minister highlighted Canada’s commitment to continuing its contributions to NATO, as well as investment and implementation of the Liberal government’s defence policy, Strong, Secure, Engaged.

“He also spoke of the steps we can take over the coming years so NATO can adapt to emerging transatlantic and global security challenges, such as climate change, disruptive technologies, hybrid threats, and disinformation,” Lane said in an emailed statement to Radio Canada International.

But it’s the looming deadline for withdrawing U.S. troops from Afghanistan set out in a peace deal with the Taliban that is at the centre of discussions of the virtual meeting.

NATO has just under 10,000 troops in the war-ravaged country helping to train and advise the Afghan security forces. Most of them are not U.S. forces, but the allies could not continue the NATO operation if American transport, logistics and other support are withdrawn.

President Joe Biden is reviewing his predecessor’s 2020 deal with the Taliban, which includes a May 1 deadline for a final U.S. troop withdrawal. In Washington, calls are mounting for the U.S. to delay the final exit or renegotiate the deal to allow the presence of a smaller, intelligence-based American force.

Speaking to reporters in Brussels, NATO Secretary General Jens Stoltenberg said that the military alliance will only leave Afghanistan when security conditions allow.

Violence is spiking and culprits include the Taliban, the Islamic State group, warlords and criminal gangs.

“Our presence in Afghanistan is conditions-based, and Taliban has to meet their commitments,” Stoltenberg told reporters.

“We will only leave when the time is right and the focus now is how we can support the peace talks,” he said, referring to slow-moving negotiations between the Taliban and the Kabul government, which began last year in Qatar.

On Thursday the ministers are also expected to agree to launch an expanded mission in Iraq, with more allied personnel training and advising in more security institutions across the country, according to NATO officials.