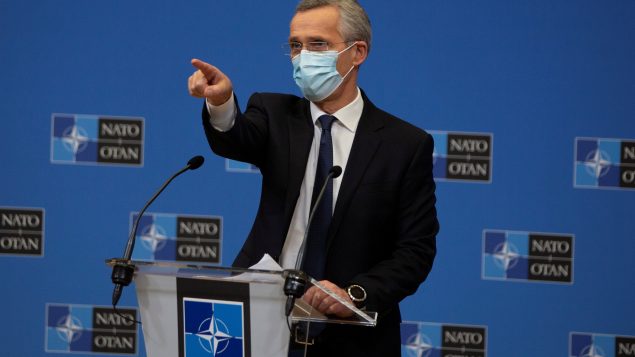 NATO Secretary General Jens Stoltenberg gestures during a news conference, after the alliance's defence ministers meeting in video format, at the headquarters in Brussels Belgium February 18, 2021. (Virginia Mayo/Pool via REUTERS)

NATO is planning a seven-fold increase in the numbers of troops deployed in Iraq to train the country’s security forces as the military alliance seeks to prevent resurgence of the Islamic State group, Secretary General Jens Stoltenberg said Thursday.

“The size of our mission will increase from 500 personnel to around 4,000. And training activities will now include more Iraqi security institutions, and areas beyond Baghdad,” Stoltenberg told reporters in Brussels, speaking at the conclusion of a two-day virtual meeting of NATO defence ministers.

The purpose of the NATO Training Mission in Iraq is to prevent a situation where NATO allies, again, may be forced into a situation where they need to be part of bigger combat operations against a resurgent Islamic State, Stoltenberg said.

“At some stage not so long ago, ISIS controlled a territory as big as the United Kingdom and roughly eight million people,” Stoltenberg said. “They have lost that control. But, ISIS is still there. ISIS still operates in Iraq. And we need to make sure that they are not able to return.” 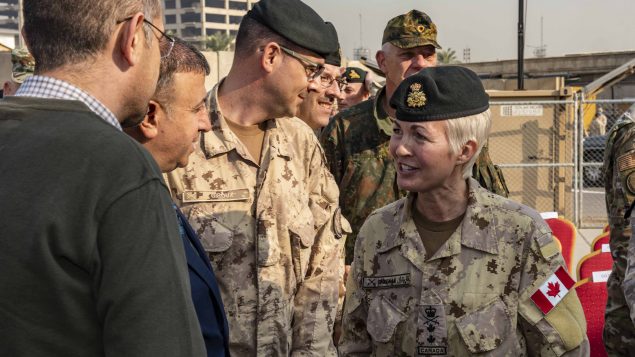 Stoltenberg said the alliance is also closely watching developments in Afghanistan in light of the looming deadline for withdrawing U.S. troops from the war-torn country set out in a peace deal with the Taliban.

“We are faced with many dilemmas and there are no easy options,” Stoltenberg said.

“At this stage, we have made no final decision on the future of our presence, but, as the May 1 deadline is approaching, NATO Allies will continue to closely consult and coordinate in the coming weeks.”

NATO has just under 10,000 troops in the war-ravaged country helping to train and advise the Afghan security forces. Most of them are not U.S. forces, but the allies could not continue the NATO operation if American transport, logistics and other support are withdrawn.

President Joe Biden is reviewing his predecessor’s 2020 deal with the Taliban, which includes a May 1 deadline for a final U.S. troop withdrawal. In Washington, calls are mounting for the U.S. to delay the final exit or renegotiate the deal to allow the presence of a smaller, intelligence-based American force. 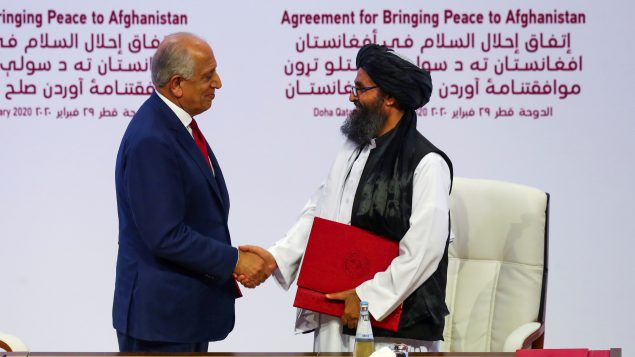 Mullah Abdul Ghani Baradar, the leader of the Taliban delegation, and Zalmay Khalilzad, U.S. envoy for peace in Afghanistan, shake hands after signing an agreement at a ceremony between members of Afghanistan’s Taliban and the U.S. in Doha, Qatar Feb. 29, 2020. (Ibraheem al Omari/REUTERS)

Violence is spiking and culprits include the Taliban, the Islamic State group, warlords and criminal gangs.

“All NATO allies welcomed the agreement between the United States and Taliban last year,” Stoltenberg said.

“At the same time, we clearly stated that, of course, there are conditions in this agreement that have to be met. And, therefore, I have many times made clear that Taliban needs to negotiate in good faith, violence has to be reduced, and the Taliban has to stop cooperating with international terrorist groups that are planning terrorist attacks on our own countries, on allied countries.”

The virtual meeting of 30 NATO defence ministers also focused on discussions of the alliance’s transformation in the coming decades, also known as NATO 2030.

Canada’s Defence Minister, Harjit Sajjan, said the federal government is focused on enhancing cooperation and interoperability between NATO and the EU to strengthen transatlantic security.

“We need to continue to work with our allies to build an alliance that is resilient, innovative, and ready to deal with emerging transatlantic and global security challenges, such as climate change, disruptive technologies, hybrid threats, and disinformation,” Sajjan said in a statement. “We need to continue developing capabilities that meet our needs now and in the future.”