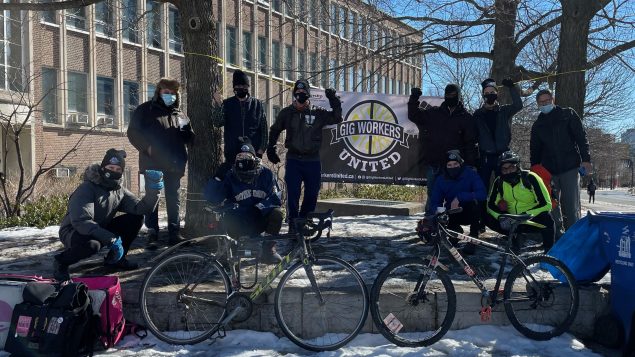 In Toronto on Feb. 25, 2021, delivery workers gathered to hand out masks and union gear as part of their campaign to organize app-based couriers for better working conditions. (CUPW)

Delivery workers whose jobs are controlled by apps are working with a major Canadian union to try to press for better working conditions. The couriers organizing the Gig Workers United campaign say the status quo is “simply unsafe and unliveable” and they want employers and legislators to make fundamental changes.

“Our demands are reasonable but our vision is big,” said courier Arash Manouchehrian. “We need liveable wages, and transparency on wages and scheduling. We need health and safety protections, we need bathroom access, warm-ups, breaks, all the things that most of our society expects as basics for all workers. We have rights, and it’s up to us to assert those rights until we get the system fixed.” 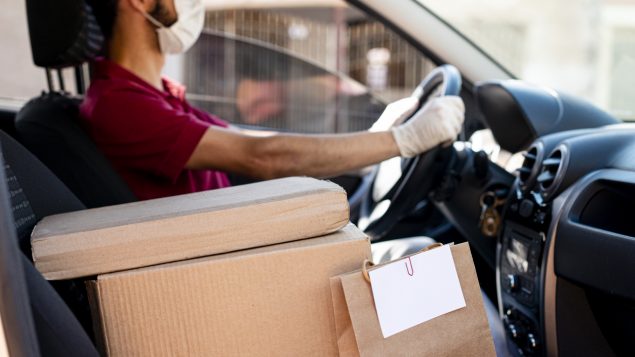 Many delivery workers whose jobs are controlled by apps lack health and safety protections. They are being invited to join a Canadian union to fight for employee rights. (iStock)

Two years ago couriers working for the food delivery platform Foodora launched a similar campaign. They won the legal right to join a union and a majority voted yes.  However, Foodora ended up leaving Canada saying its operations there were not profitable.

This is not deterring the Gig Workers United campaign organizers who have launched a website and will use social media to reach out to couriers and try to organize them. Over the lunch hour on Feb. 25, 2021, organizers handed out pamphlets and buttons to raise awareness about the campaign. The drive is reaching out to couriers who deliver restaurant meals, groceries, or parcels by bike or vehicle. The campaign has the support of the Canadian Union of Postal Workers (CUPW).

“The couriers have shown that traditional union organizing is possible in this space,” said Jan Simpson, CUPW’s national president. “But they’ve gone farther than that, with community-organizing tactics and collective mutual aid. They’ve formed a worker-led organization that we’re proud to support because their fresh energy and ideas are what it takes to improve working conditions and reject silicon valley’s model of exploitation.”