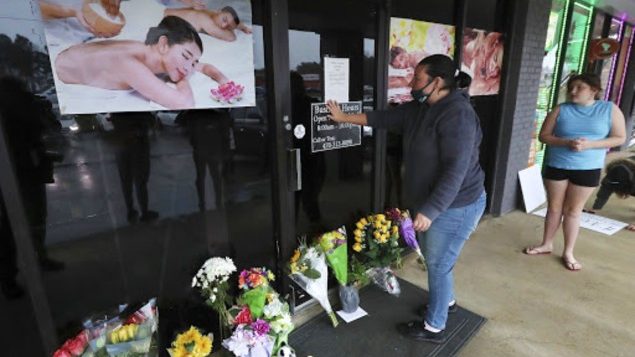 Jessica Lang pauses and places her hand on the door in a moment of grief after dropping off flowers with her daughter Summer at Youngs Asian Massage parlor where four people were killed, Wednesday. At least eight people were found dead at three different spas in the Atlanta area Tuesday by suspected shooter Robert Aaron Long. Lang, a local resident who lives nearby, said she knew one of the victims. (Curtis Compton/Atlanta Journal-Constitution via The Associated Press

Asian Canadians are calling for an end to anti-Asian racism and for more to be done to protect sex workers and migrants after eight people, including six Asian women, were shot and killed in Atlanta, Georga on Tuesday.

On Wednesday, a number of community groups across Canada released a joint statement saying what happened in Atlanta is not an isolated incident but an example of a large rising tide of anti-Asian racism.

“This comes amid attacks against people of Asian descent across North America. What has happened in Atlanta is not an isolated incident,” the statement added.

A year-end report the Vancouver police released last month found that overall hate crimes increased by 97 per cent in the city in 2020, and anti-Asian hate crimes were up by 717 per cent. 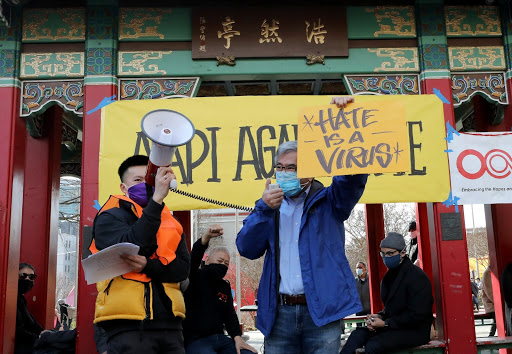 Former Washington Gov. Gary Locke says “Hate is a Virus” during a rally to speak out against anti-Asian hate and violence in Seattle on March 13, 2021. (Alan Berner/The Seattle Times via The Associated Press)

The statement also demanded respect, dignity and rights and protections for Asian and migrant women, sex workers and women working in masage parlours, and that their livelihoods must be protected.

“This violence is not isolated and stems from a long history of fetishizing, hypersexualizing and marginalizing Asian women,” the group said in their statement.

“Anti-migrant and anti-sex worker legislation promote and encourage hate towards Asian migrant sex workers, labelling them as undeserving and unworthy of rights and protection.”

The statement said that many cities have excessive policing and regressive policies against massage parlours, such as prohibiting them from locking their doors, and forcing them to work in remote areas.

It also said that stigmatization and marginalization has increased their exposure to violence and exploitation, which has hindered access to basic health and social supports as well as protection and justice.

Elene Lam, the executive director of the Toronto based Butterfly Asian and Migrant Sex Workers Network, released a report in 2018 that surveyed massage and holistic practitioners. It found that almost half of respondents had experienced violence in the workplace, but only 6.9 per cent reported incidents to law enforcement.

The report also found that 60 per cent of respondents had a negative impression of municipal bylaw enforcement officers and police.