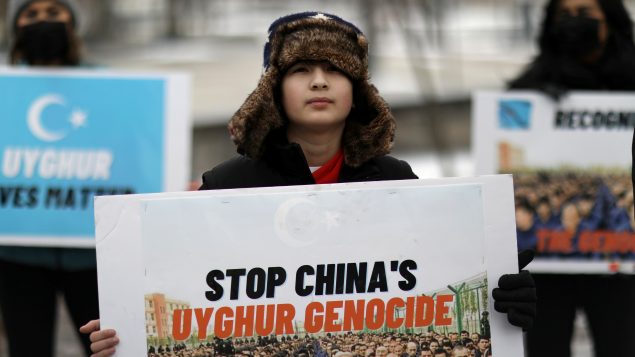 FILE PHOTO: People take part in a rally to encourage Canada and other countries as they consider labeling China's treatment of its Uighur population and Muslim minorities as genocide, outside the Canadian Embassy in Washington, D.C., U.S. February 19, 2021. (Leah Millis/REUTERS/File Photo)

Canada joins international sanctions on China over treatment of Uighurs

Canada has joined the U.S, the EU, and Britain by imposing sanctions on four Chinese officials and one entity in response “to the repression of Uighurs and other ethnic minorities in Xinjiang,” Prime Minister Justin Trudeau said Monday.

“These measures reflect our grave concern with the gross and systematic human rights abuses taking place in the region,” Trudeau said during his press conference in Trois-Rivières, Quebec.

“We will continue to work closely with our international partners to pursue accountability and transparency.”

“This includes the mass arbitrary detention of more than one million Uighurs and other Muslim ethnic minorities on the basis of their religion and ethnicity, as well as political re-education, forced labour, torture and forced sterilization,” Garneau said.

The sanctions by the U.S., the EU, Britain and Canada are the first such coordinated Western action against Beijing under the new Biden administration in Washington.

‘Nothing but lies and disinformation,’ Beijing says

Beijing hit back immediately with punitive measures against the EU that appeared to be broader, blacklisting European lawmakers, diplomats and think tanks, including families, and banning their businesses from trading with China.

“This move, based on nothing but lies and disinformation, disregards and distorts facts, grossly interferes in China’s internal affairs, flagrantly breaches international law and basic norms governing international relations, and severely undermines China-EU relations,” said a statement issued by the Chinese foreign ministry.

The Uighur population in Xinjiang has continued to grow at a pace higher than other ethnic groups, including the Han majority, according to Chinese officials.

The European Union was the first to impose sanctions on Monday on four Chinese officials, including a top security director, and one entity, a decision that was mirrored by Britain and Canada later in the day.

The U.S. had already last year blacklisted the top official in Xinjiang, Chen Quanguo, who was not targeted by the other Western allies on Monday, to avoid a larger diplomatic dispute, experts and diplomats said.

Those targeted by the EU, Canada and Britain included Chen Mingguo, the director of the Xinjiang Public Security Bureau. The EU said Chen Mingguo was responsible for “serious human rights violations.”

Under the sanctions Canadians and Canadian institutions are prohibited from “engaging in any activity related to any property of these individuals or providing financial or related services to them,” according to federal regulations posted online.

“The individuals listed in the schedule to the regulations are also rendered inadmissible to Canada under the Immigration and Refugee Protection Act.”

Last month, the lower house of Canada’s Parliament voted to pass an opposition motion declaring that China’s treatment of Uighurs and other Turkic Muslims in Xinjiang meets the definition of genocide set out in the 1948 UN Genocide Convention.

The motion also calls on the government to lobby the International Olympic Committee to move the 2022 Winter Olympic Games out of Beijing.