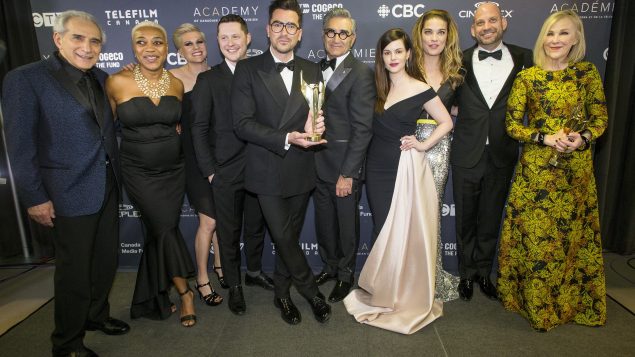 The cast of 'Schitt's Creek' poses for a photo after winning the Award for Best Comedy Series at the Canadian Screen Awards in Toronto on March 31, 2019. The show, which ended last spring after six seasons, is up for 21 awards this year. (THE CANADIAN PRESS/Chris Young)

It’s all over but the huzzahs for Schitts Creek—a show that just won’t leave quietly.

Last September in Los Angeles it won nine Emmys–the most ever wins in a single season for a comedy series.

Last month, the show about a once wealthy family gone to seed was awarded the Hollywood Foreign Press Association’s Golden Globe for best television TV Musical or Comedy and one of its stars, Catherine O’Hara won for Best Actress in a Television Series, Musical or Comedy. 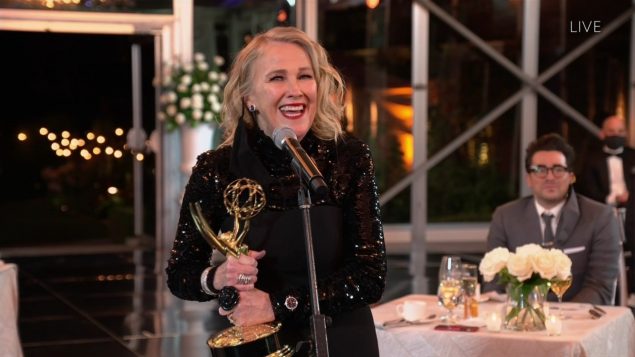 Catherine O’Hara accepts the Emmy for Outstanding Lead Actress in a Comedy Series for Schitt’s Creek during the 72nd Emmy Awards telecast on Sept. 20, 2020. (Invision for the Television Academy/AP)

Now, for the third year in a row, it leads (or is tied) for the most nominations at the Canadian Screen Awards–with 21.

Not bad for a show that saw its run end last spring–after six seasons.

But Schitt’s Creek is not the only show going out in style.

Cardinal, which broadcast its fourth and final season last year, had the second-most nods with 15 and tied with Trickster — which was cancelled earlier this year after its first season. 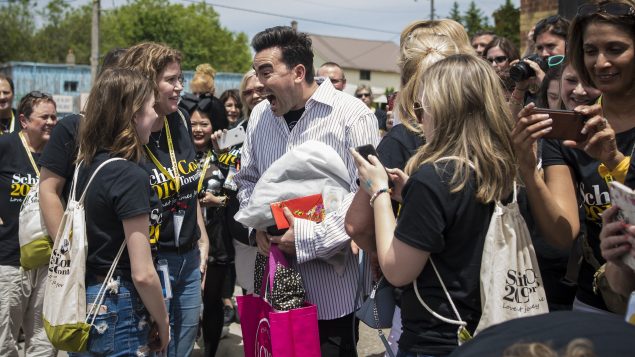 Dan Levy, star and co-creator of Schitt’s Creek, reacts after fans present him with a gift during a break from shooting in Goodwood, Ont., on June 9, 2019. After six seasons, the show is going out in style. (THE CANADIAN PRESS/Tijana Martin)

As well, another show whose run ends this spring, Kim’s Convenience, has 11 nominations.

Bit Playas leads digital media nominations with six, Hey Lady! with five, and both Avocado Toast the series and Ghost BFF with four.

Winners will be announced in May.

A full list of nominations can be viewed HERE.