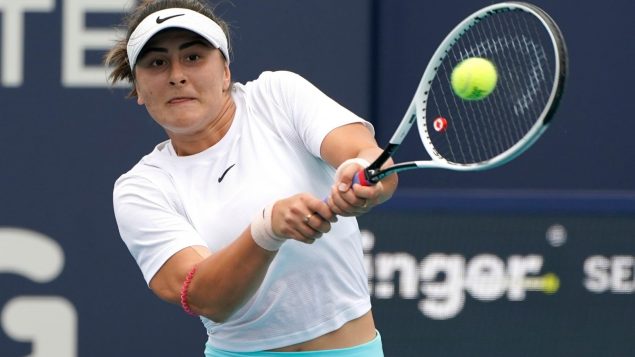 Bianca Andreescu of Canada returns to Ashleigh Barty of Australia during the finals at the Miami Open tennis tournament, Saturday, April 3, 2021, in Miami Gardens, Fla. Barty won 6-3, 4-0, as Andreescu retired due to injury. (AP Photo/Lynne Sladky)

Canadian tennis star Bianca Adreescu had to withdraw from the Madrid Open, a professional tennis tournament, after testing positive for COVID-19.

In a tweet on Sunday, Andreescu explained that after two negative tests before her flight to Madrid, she was informed of a positive COVID-19 test upon arriving in the city.

“After testing negative twice before my flight to Madrid, I was sadly informed that I tested positive upon my arrival for COVID-19 and therefore will not be playing at the Madrid Open later this week,” Andreescu said on Twitter. “I am feeling good, I’m resting and continuing to follow the health protocols and safety guidelines. I look forward to getting back out on the court very soon.”

Bianca Andreescu has been forced to withdraw from the Mutua Madrid Open due to illness.

“I’m very sorry that I have to withdraw from Madrid, I was really looking forward to playing in Madrid”, Andreescu said.

We wish you a speedy recovery, @Bandreescu_!

The Madrid Open would have been Andreescu’s first on-court appearance since suffering an ankle injury in the final of the Miami Open earlier this month.