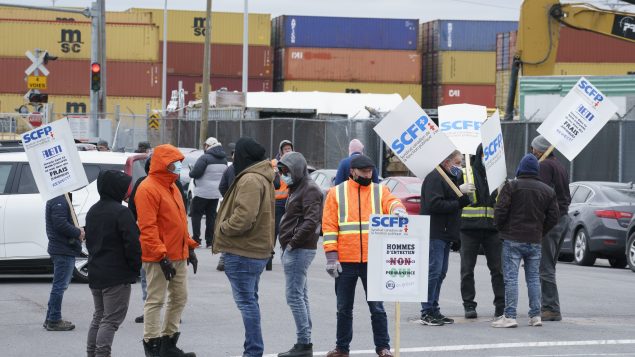 Striking dockworkers from the Port of Montreal walk the picket line during the first day of a strike in Montreal on Monday, April 26, 2021. (Paul Chiasson/THE CANADIAN PRESS)

An open-ended strike by more than 1,000 dockworkers at the Port of Montreal has shut down operations at Canada’s second-largest port, threatening major disruptions to supply chains of thousands of businesses across the country.

The dockworkers, who have been without a collective agreement since December 2018, began the strike on Monday morning, after filing their 72-hour strike notice on April 23. The union said the current dispute was triggered when their employer, the Maritime Employers Association (MEA), extended the workday by 100 minutes per shift without consulting them.

The longshoremen at the port had been on an overtime strike since April 17 and had refused to work weekends since April 18.

The strikes comes as federal Labour Minister Filomena Tassi signalled on Sunday she was prepared to present back-to-work legislation in the House of Commons if an agreement is not reached.

The federal government has been under pressure to intervene in the labour dispute by both the Ontario and Quebec governments, as well as by various business groups and trade associations, who are anxious to avert the kind of economic fallout that followed a 19-day strike last August.

‘Of utmost importance for the Canadian economy’ 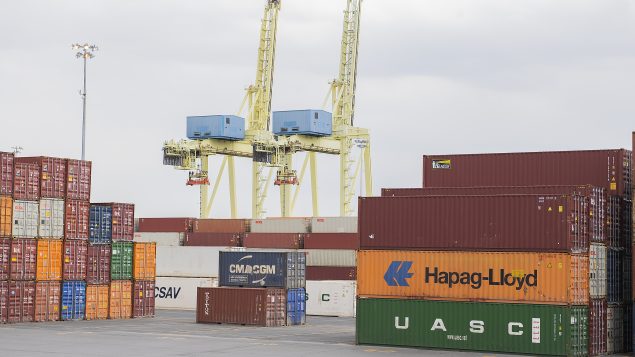 Shipping containers are shown at the Port of Montreal, Sunday, April 25, 2021. A general strike at the port began on Monday. (Graham Hughes/THE CANADIAN PRESS)

The Port of Montreal welcomes close to 2,000 cargo ships per year carrying over 40 million tonnes of cargo. That translates into about $275 million worth of goods every day, according to the port authority.

The economic impact of a ten-day shutdown of the port would range from $10 million to $25 million per day, according to a study published by Acronyme consulting agency.

“Maintaining activities at the Port of Montreal is of utmost importance for the Canadian economy,” said Jasmin Guénette, vice-president of national affairs at the Canadian Federation of Independent Business.

A second strike in such a short time could have a negative impact on the activities of many small and medium-size enterprises (SMEs), she added.

“This is a critical moment,” Guénette said. “The government needs to act quickly. It must spare no effort to ensure we do not penalize SMEs, which have already been shaken by the pandemic.”

‘This is simply abhorrent’ 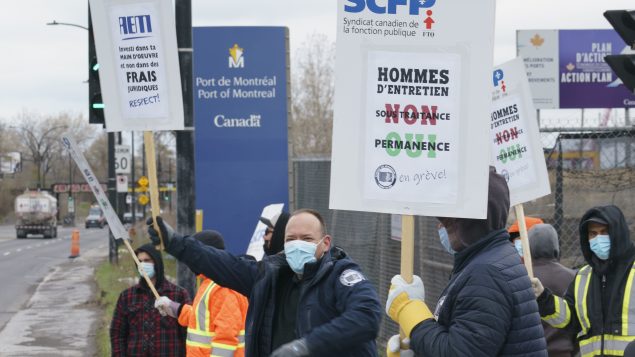 Striking dockworkers from the Port of Montreal walk the picket line during the first day of a strike in Montreal on Monday, April 26, 2021. (Paul Chiasson/THE CANADIAN PRESS)

But the government’s intention to legislate an end to the work stoppage also drew a sharp rebuke from the left-of-centre New Democratic Party (NDP), as well as the union representing the dockworkers.

“By indicating their intention to introduce a special bill, forcing dock workers back to work at the Port of Montreal, the Liberals are clearly letting us know that they don’t care about workers’ rights,” said NDP Deputy Leader Alexandre Boulerice.

By interfering in the negotiation process, the federal government is destabilizing the balance of power between workers and their employer, he added.

“This is simply abhorrent. The employer’s position is strengthened and they will no longer have any incentive to settle the labour dispute,” Boulerice said.

Canada’s largest union, the Canadian Union of Public Employees (CUPE), which represents the 1,100 longshoremen at the Port of Montreal also slammed the federal government’s decision to introduce back-to-work legislation.

“Once again the Trudeau Liberals are acting like Conservatives, siding with bosses against workers by meddling in the bargaining process,” said CUPE national president Mark Hancock. “There can never be free, fair collective bargaining in Canada under the threat of back-to-work legislation.”

CUPE is demanding the Liberals withhold their back-to-work legislation, he added.

The minority Liberal government would need the support of other parties in Parliament to pass the legislation.

With the NDP steadfastly opposed to the bill, the Liberals will have to court support from their Conservative archrivals or the separatist Bloc Quebecois party. The contents of the bill haven’t yet been made public. The earliest it can be introduced in the House of Commons is Tuesday morning.