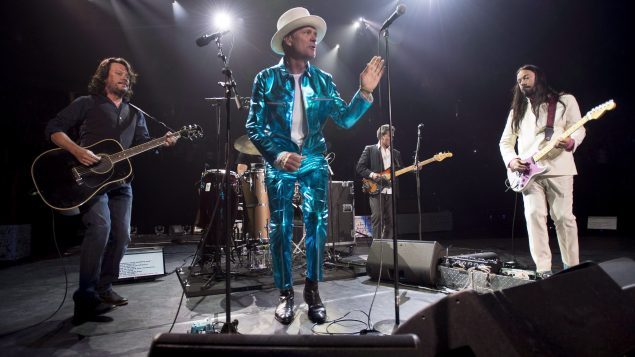 The Tragically Hip, seen performing in Vancouver on July, 24, 2016, will appear on television in June--at this year's Juno Awards broadcast--for the first time since their lead singer, Gord Downie (front and centre), died of cancer nearly four years ago. (THE CANADIAN PRESS/Jonathan Hayward)

The iconic Canadian musical rock band The Tragically Hip are set to perform on television for the first time since the death of their lead singer, Gord Downie, almost four years ago.

The Canadian Academy of Recording Arts and Sciences (CARAS) announced today the band will be part of the 50th Juno Awards broadcast on June 6.

Downie was diagnosed with glioblastoma, a form of brain cancer, in 2015.

He died in October 2017 at the age of 53, setting off a mourning that extended far and wide across the country–to Canadians of all ages and backgrounds.

“It’s been such a difficult year for our fellow musicians, we wanted to do something to honour them in a way that would make Gord smile,” the band said in a press release.

The band will also receive the 2021 Humanitarian Award that “recognizes outstanding Canadian artists or industry leaders whose humanitarian contributions have positively enhanced the social fabric of Canada and beyond.”

In a story published today, the CBC’s Jess Huddleston reports the band “has donated to, and helped raise funds for various social and environmental causes, including Camp Trillium, the Canadian Cancer Society, the Sunnybrook Foundation, the Special Olympics and more.”

As well, Huddleston reported, Downie was “instrumental in raising awareness about reconciliation with Indigenous communities,” noting that “Downie’s 2016 multi-media project Secret Path, told the story of Chanie Wenjack, a 12-year-old boy who died after escaping a residential school in 1966.

Previous recipients of the Humanitarian Award include Arcade Fire, Neil Young and Rush.

The award will be presented by Geddy Lee and Alex Lifeson of Rush.

Singer-songwriter Feist will also be performing at this year’s ceremony.

She is having no problem playing second fiddle.

“I had a chance to tour with The Hip early on in my touring life, for something like a year,”  Feist said in the press release.

“Getting to be a fly on the wall of a camp that operated with such warmth and community by day, and then watch them transform and transcend every night to touch so many people was my first big education. I was a kid in their midst and I’m touched to be invited into the clan now, to play alongside them. The only way I’m making any sense of it is to imagine I’ll be singing backups for Gord, and know my 20-year-old self wouldn’t believe it. Like the rest of Canada, I’ll be so happy to hear these kings of song play again, and am very honoured to join them as they receive their Humanitarian Award.”

With files from CBC News (Jess Huddleston), The Canadian Press