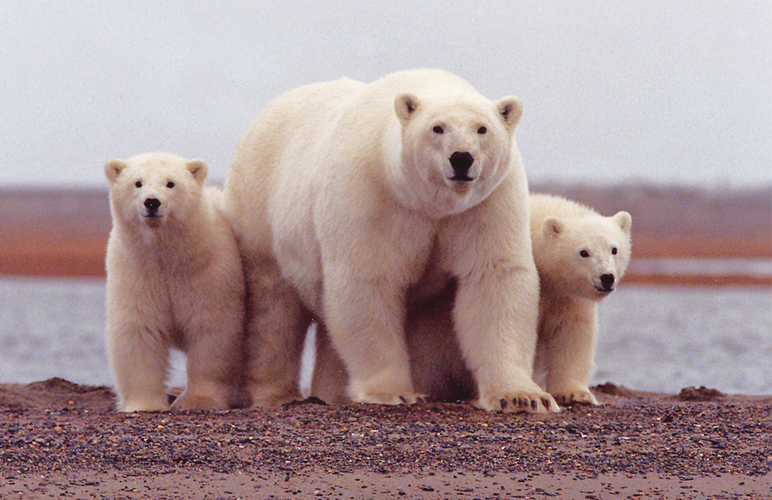 A new study of polar bears prowling the ice-bound shores of Svalbard has found them carrying lower levels of the PCBs and other industrial poisons than a decade ago, offering some good news for a species that may face critical loss of ice habitat as the Arctic warms.

Blood levels of PCBs and other contaminants in cubs dropped as much as 59 percent between 1998 and 2008, with PCB levels dropping 55 percent in the blood of their mothers, according to research by Norwegian and Canadian scientists.

“The levels of PCB compounds in blood samples from females are on the decline,” said lead author Jenny Bytingsvik, a doctoral student at the Norwegian University of Science and Technology, in this story.

“For newborn, vulnerable cubs, this is a very positive trend. Reduced levels of PCBs in the mother bears’ blood mean that there is also less contamination in their milk. Even though the PCB levels we found are still too high, this shows that international agreements to ban PCBs have had an effect.”

Contaminants in the Arctic

PCBs, or polychlorinated biphenyls, come from a family of industrial chemicals used for decades in electrical transformers, oils, plastics and paints. Although banned in the United States since 1979 and throughout the world by the 2004 Stockholm Convention on Persistent Organic Pollutants, they continue to be used in some parts of Asia and the Third World.

Over decades, these contaminants accumulate in the Arctic, where they work up the food chain, finally accumulating in the blood and fatty tissue of top predators like polar bears, seals and killer whales.

The chemicals are part of a larger class of Persistent Organic Pollutants that include flame retardants and other substances that mimic natural hormones and disrupt physiological processes once ingested by animals. They can be as stubborn as they are dangerous, slow to breakdown while drifting on the globe’s air and ocean currents many years after their original industrial source shuts down. (Additional chemicals keep coming onto the market and begin polluting, according to recent reports of new flame retardants “piling up” in the Canadian Arctic.)

“Polychlorinated biphenyls (PCBs) are still among the dominating persistent organic pollutants (POPs) in arctic mammals and the levels of PCBs in polar bears (Ursus maritimus) are among the highest reported in any species,” wrote Bytingsvik and her five co-authors in their study. PCBs are believed to cause problems in the bears’ thyroid hormone system, immune systems and behavior.

‘Not easy to be a polar bear’

Even without the prospect of long-distance poisoning by human industry, polar bears face immense challenges. The steady decline of summer sea ice threatens to wipe out vast reaches of habitat essential for hunting and denning. New research predicts drastic declines in polar bear populations by the end of the century. The U.S. Fish and Wildlife Service offers this polar bear primer for more information.

“It’s never been easy to be a polar bear,” is how the story about Bytingsvik’s project puts it. “They may have to go months without eating. Their preferred food, seal, requires enormous luck and patience to catch. Add to that the melting of Arctic sea ice due to climate change, and the poisoning of the Arctic by toxic chemicals, and it’s easy to see why polar bears worldwide are in trouble.”

The irony that 2,500 animals living near Svalbard — one of the world’s least-developed and most-pristine locales — face debilitating contamination from industrial activity thousands of miles to the south has not been lost on Bytingsvik’s team.

In a 2009 story provocatively titled “The dirtiest clean place on earth,” the Norwegian scientist describes how toxic chemicals might kill off a Svalbard polar bear in the future. They have “laid waste to (her) immune system and befuddled her hormones. As a result, she’s sick and confused, and can’t think well enough to find new ways to feed herself. When (the bear) finally dies of starvation at the end of the summer of 2030, it won’t be because there wasn’t enough food to eat.”

In the latest study, Bytingsvik compared blood samples from sows and cubs in 1997 and 1998 with samples from 2008 — using 26 sows and 38 cubs spread over the two time periods. Levels of PCBs in the mothers dropped 55 percent over the 10 years, and about 59 percent in cubs. Levels of a form that PCBs take after they get metabolized by the animals and end up in sow’s milk — OH-PCBs — also declined dramatically.

“While these figures are encouraging, Bytingsvik notes that the overall levels of OH-PCBs and PCBs in the cubs are still too high,” the story explains here. “As a comparison, the 2008 concentrations of OH-PCB in cubs was roughly 90-170 times higher than levels that are known to affect thyroid hormones in human babies.”

“PCBs are considered to be among the worst environment contaminants, so it’s good to see that the levels have gone down,” added co-author Bjørn Munro Jenssen, Bytingsvik’s academic supervisor and the Norwegian leader of a broader project assessing polar bear health.

“At the same time, we can’t forget that animals in the Arctic are exposed to a number of other environmental pollutants that are carried northward on the wind or by ocean currents. On top of that, there’s climate change. This creates big challenges for many species.”