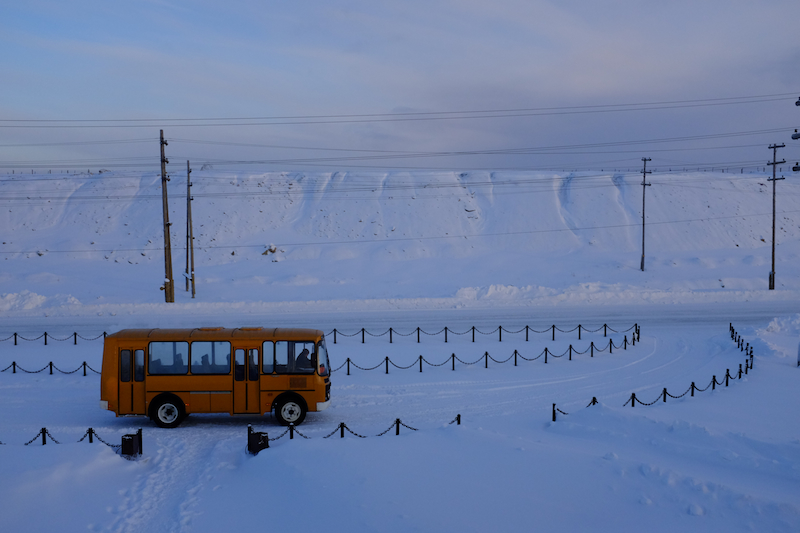 Our little bus waiting for us to finish looking at the open-pit mine in Mirny City, Russia. (Mia Bennett) 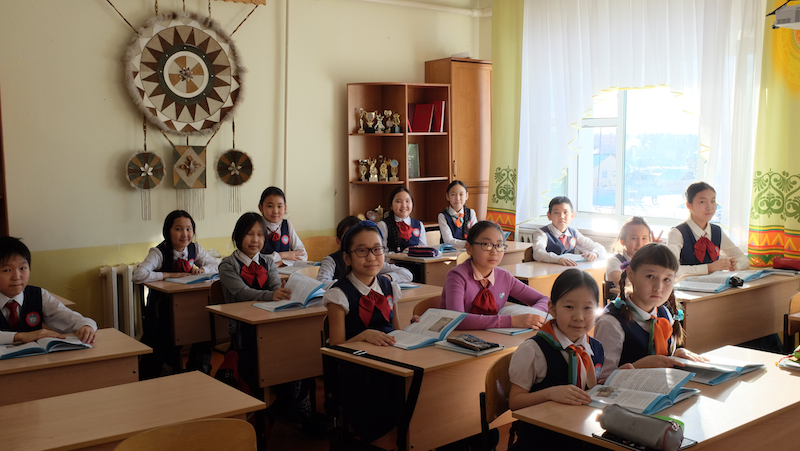 Schoolchildren learning about traditional Yakut culture in a school in Namtsy, a village north of Yakutsk, in Russia. (Mia Bennett) 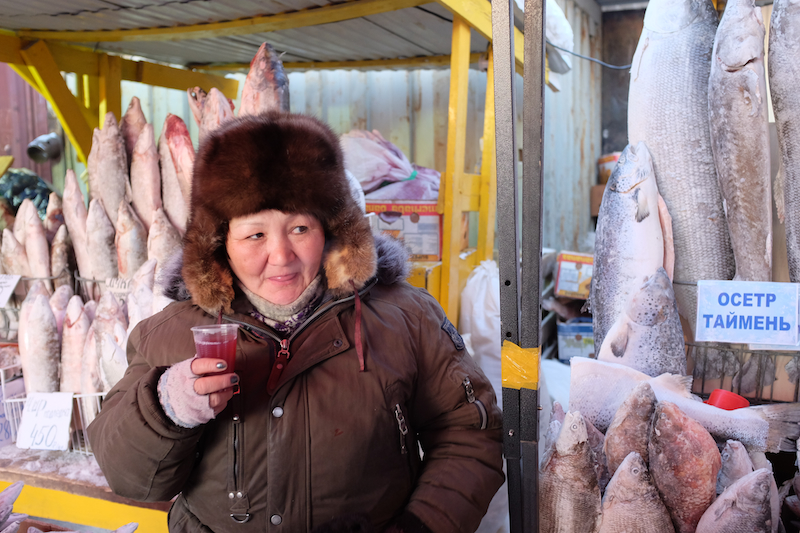 A Yakut woman selling fish, vertically frozen, at a market in Yakutsk, the capital of the Sakha Republic, in Russia, and one of the coldest cities on earth. (Mia Bennett) 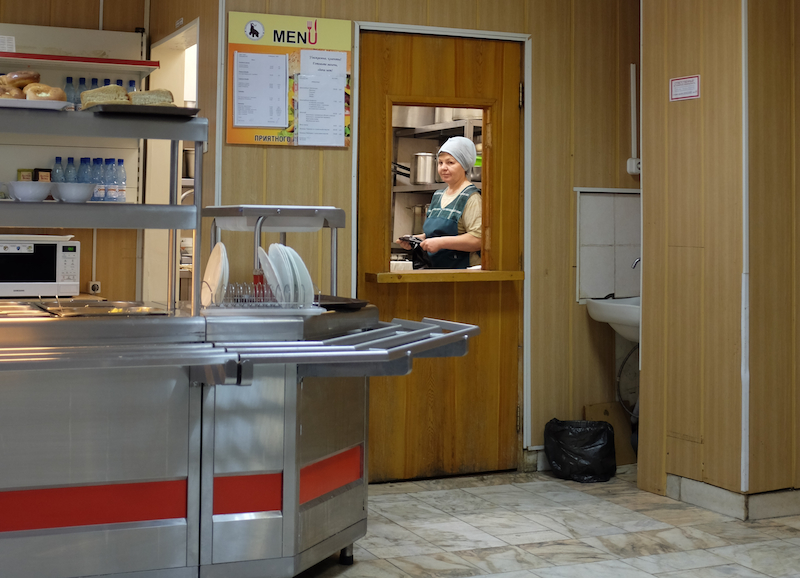 The cafeteria lady at the Mirny Polytechnic Institute in the Sakha Republic, Russia. (Mia Bennett) 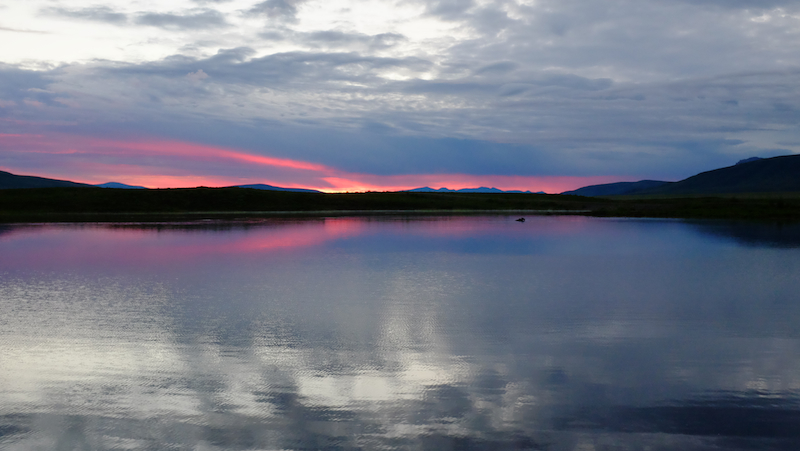 A moose swimming in the pink fluorescent rays of the 4am sunrise at Two Moose Lake in Yukon, Canada. (Mia Bennett) 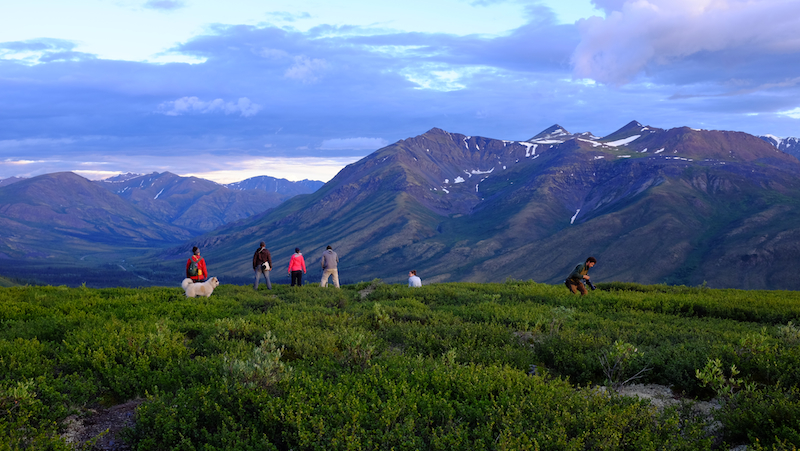 Taking photos of the midnight light from Goldensides, a trail in Tombstone Territorial Park in Yukon, Canada. (Mia Bennett) 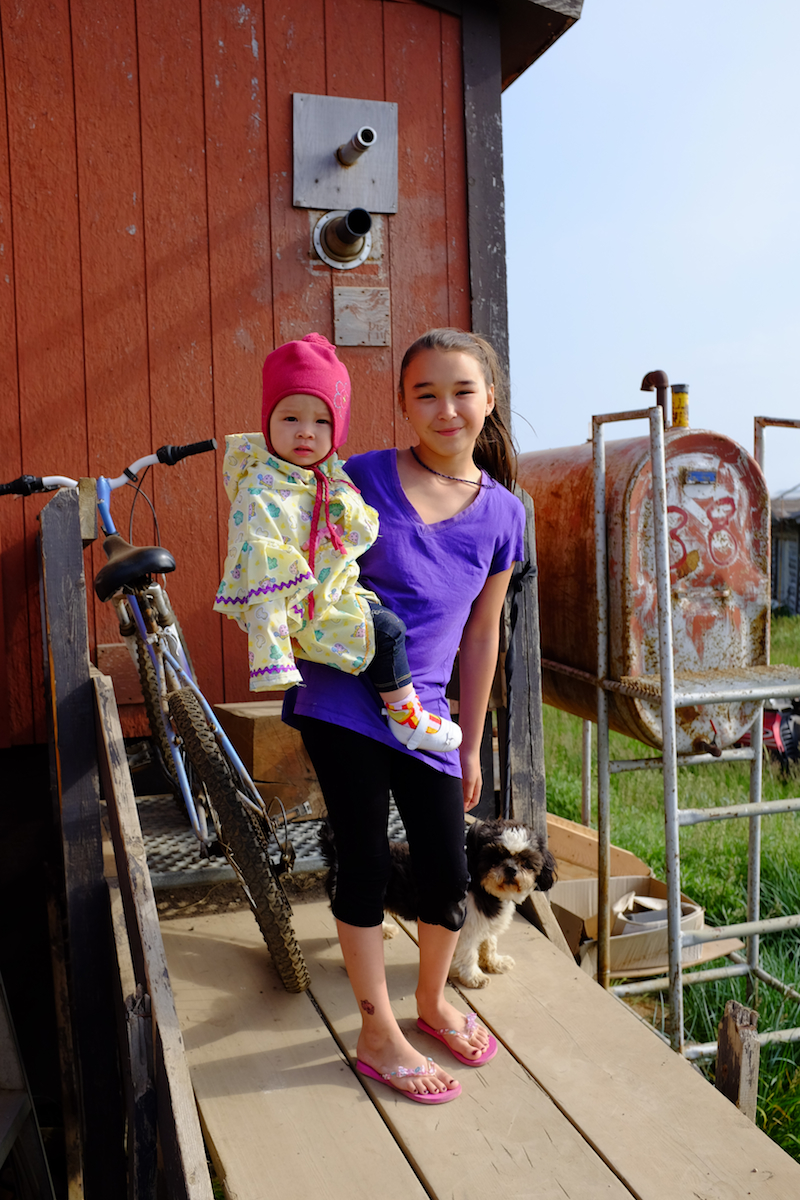 A girl, her little sister, and their pet dog in Tuktoyaktuk, Northwest Territories, Canada. (Mia Bennett)

In 2016, I traveled to far-flung parts of the Arctic I’d never before visited.

I spent over two months of last year in the North, bundling up for deepest winter in Russia’s Sakha Republic and seeking shade from the unrelenting sun of an Arctic summer spent above the treeline in Canada’s Northwest Territories. I also returned to more familiar grounds in Iceland’s charming capital, a city that seems to metamorphose with every visit.

The North’s stark and impressive beauty never ceased to amaze, but more memorable were the people I encountered during my long journeys across tundras and mountains. At times I wouldn’t see another person on the road for hours, and then suddenly I’d be offered a cup of tea made from wild herbs, a bowl of hot borscht, or a piece of fresh-baked bannock in a welcome resting spot.

The hospitality that fills out the wide spaces of the Arctic is what makes it a place that keeps calling me back year after year. Sometimes, in moments when the mercury drops to 40 below, I’ll have fleeting thoughts of switching my research focus to a place like Southeast Asia. But then I’ll remember the mornings sipping Nescafe 3-in-1 out of a quickly melting plastic cup while staring at Soviet apartment buildings, the long evenings playing checkers inside a community center on the edge of the Arctic Ocean, losing every time to a man wearing a ring he had carved into the shape of a polar bear, and the nights spent swimming in the Arctic Ocean under the midnight sun with a sun dog arcing across the orange sky, and I know I’ll be back.

Below are a selection of photos from my journeys across the Arctic in 2016. Most of them haven’t appeared on my blog before.

As for how this year is shaping out, so far, I’m planning to make a trip to Barrow, Alaska for Ukpeaġvik Iñupiat Corporation’s Arctic Business Development tour. In March, I’ll make a return visit to the Northwest Territories to travel along what will likely be the last-ever ice road between Inuvik and Tuktoyaktuk. Later this year, a permanent highway connecting the two towns – and therefore connecting Canada to the Arctic Ocean by land – is supposed to open, thereby replacing the seasonal ice road. I’m also hoping to return to Russia and to Iceland, possibly to hike in the Westfjords. Readers, if you will be in any of these places, feel free to drop me a line.

I look forward to another year sharing writings, photos, and maps from the northernmost places on Earth with you and thank you for accompanying me on the journey so far.

Canada: Blog: The return of the Arctic Five, Eye on the Arctic