In my previous post, I wrote about how a Concorde jet and Chinese tourists have irrevocably changed Lapland in the past three decades and how a possible Arctic Railway may further upset the balance in this region of northern Finland that the Sami have called home for thousands of years. Despite – or perhaps partly in reaction to – these pressures, the Sámi are taking cultural preservation into their own hands.

Deep in the boreal forest 200 miles north of Rovaniemi lies the town of Inari, a place considered the Sámi capital of Finland. It’s here where a dark wooded building called Sajos, the Sámi cultural and administrative center which also houses the Sami Parliament of Finland, lies nestled between an asphalt parking lot and some pine trees. A small supermarket and a few hunting outfitters and souvenir shops line the center of town, which was quiet on the cold, cloudy day we arrived. Out front, a woman walked two scruffy dogs while a black Porsche sat parked nearby.

As part of the Calotte Academy, a traveling symposium through northern Finland, Norway, and Russia, we stayed for a few days at Vasatokka, a Finnish Youth Centre on the shores of Lake Mutusjärvi. During our visit, two instructors from the Inari-based Sámi Education Institute gave presentations on Sámi cultural and language education. The institute provides vocational training across a range of subjects that help keep Sámi traditions alive while also preparing Sámi youth for employment in the workforce, be it in reindeer herding, tourism, or information technology.

Despite the fact that only 10% of Sámi are engaged in reindeer herding, the practice’s cultural importance means it forms an instrumental part of the institute’s curriculum. Jackie Hrabok-Leppajarvi, an associate professor originally from northern Canada, joyfully described the ease of teaching reindeer herding in Lapland. After she teaches students a certain skill in person, once they go back home, she asks them to demonstrate to her how they are implementing their new knowledge in the field via videos they send through a program called AdobeConnect. In Finland, the birthplace of Nokia, 4G is available in every lake, meadow, and stream. “It’s awesome. It’s very different than my Alaska,” she exclaimed.

Hrabok-Leppajarvi spends six months out of the year working at the University of Alaska Fairbanks, where she has a joint appointment. Deep in the bush in America’s 49th state, it’s much harder to determine if students are learning the tools of the trade because of the lack of cell phone service outside of the main settlements.

The Sámi Education Institute also offers a variety of classes that teach students to make use of the ample resources around them, including ones that would normally go unremarked by the city-dwellers that make up 85% of Finland’s population. In the handicraft classes, students learn to turn roots, birchbark, and reindeer skin into art. In cooking classes, recipes for traditional Sámi dishes like kuu’mik (a type of bread baked with a filling inside) and others using fish and mushrooms and herbs gathered from the soft forest floor are passed on.

Intriguingly, several preparations involve the use of cambium, the vitamin-rich inner bark of the pine tree. The Skolt Sámi, an Eastern Sámi people that traditionally have inhabited the Kola Peninsula in Russia and nearby areas spanning the present-day borders of Norway, Finland, and Sweden, were particularly fond of it. They used special tools made from reindeer antlers to scrape the bark off the tree in early summer, when it is relatively easy to peel off in sheets, and then ground it against reindeer skin until it reached the texture of a rough flour. Swedish and Finnish farmers, in contrast, only ate the food during times of famine.

Demonstrating the versatility of the ingredient, Skolt Sámi served up pine bark flour as a porridge (piets´hutt), mixed it with fatty reindeer stock in winter, ate it as a dessert soup (peecimääli), and, for the ultimate Arctic snack food, combined the dry, slightly sweet flakes with fish roe and reindeer milk (source: Siida).

After the Second World War, some Skolt Sámi continued to eat the pine bark, but they had to do so surreptitiously since they were supposed to pay for the use of the trees. While its local consumption has declined since a century ago, cambium may become the next trendy edible export from the Arctic after products like glacial water, cloudberries, and sea buckthorn. The shop for the Arktikum museum in Rovaniemi sells sleekly packaged boxes of “Instant-Chaga,” a freeze-dried tea made from Arctic Finnish mushrooms, for 99 euros each. Signs in English and Chinese promote the drinkable fungi’s salutary effects (the dwindling numbers of Russian tourists probably have neither the spare cash nor the patience for such highfalutin beverages). Given the trendiness of superfoods and New Nordic cuisine,soon enough, more wheatgrass-sipping millennials in Copenhagen, New York, and Shanghai than Skolt Sámi in Lapland may be making use of pine bark – this time sprinkled on kale and quinoa salads rather than as a hearty porridge.

The Sámi Education Institute also prides itself on its language instruction. The second presenter of the day, Tauno Ljetoff, a reindeer herder and teacher of Skolt Sámi, a local dialect, noted that only 200-300 speakers are left among the approximately 2,000-3,000 Skolt Sámi. Their culture is unique from other Sámi subcultures partly by virtue of its adherence to Orthodox Christianity. Many Skolt Sámi still have Russian surnames like Romanoff. “It is an Eastern culture,” Ljetoff remarked.

At a village a few hours away across the border in Neiden (Skolt Sámi: Njauddâm), Norway, an old wooden church with a three-barred cross symbolized the penetration of the religion and its adherents from the east at a time when Sámi and their reindeer, traders, and missionaries could move more fluidly across the tundra, before national borders began to be erected in the area in the nineteenth century. The Skolt Sámi language and culture came under further pressure during the global exchange of lands in the traumatic aftermath of World War II, when the area they inhabited in northern Finland, called the Petsamo region, was ceded to Russia. Petsamo’s Skolt Sámi, many of whom had fought with the Finns against the Russians, were evacuated across the new border to Finland.

Ljetoff believes that the Skolt Sámi language can be successfully retained as long as one to two percent of the population acquires the ability to speak. Reaching this figure is helped by the increasing popularity of learning Skolt Sámi within the community. “The attitude has changed,” he noted. “There’s more interest in teaching children Sámi, whereas before they taught them Finnish because it was felt that Sámi was a dying language.”

Ljetoff’s statement contrasted sharply with what a museum guide at the Norwegian state-funded Skolt Sámi Museum (Skolt Sámi: Ä’vv Saami mu’zei) in Neiden said during our guided visit. She noted that within the local community, only one Skolt Sámi man speaks the language and that sadly, his children do not want anything to do with it. This negative feeling may, she surmised, stem from the Norwegian state’s stricter assimilation policies over the past several generations compared to the situation in Finland. This program of “Norwegianizing” the Sámi may have resulted in deeper feelings of shame towards identifying as indigenous. Compounding these negative perspectives is a perception within broader Sámi society of the Skolt as being of inferior status. Neiden’s museum, which opened in July 2017, hopes to change these views for the better. 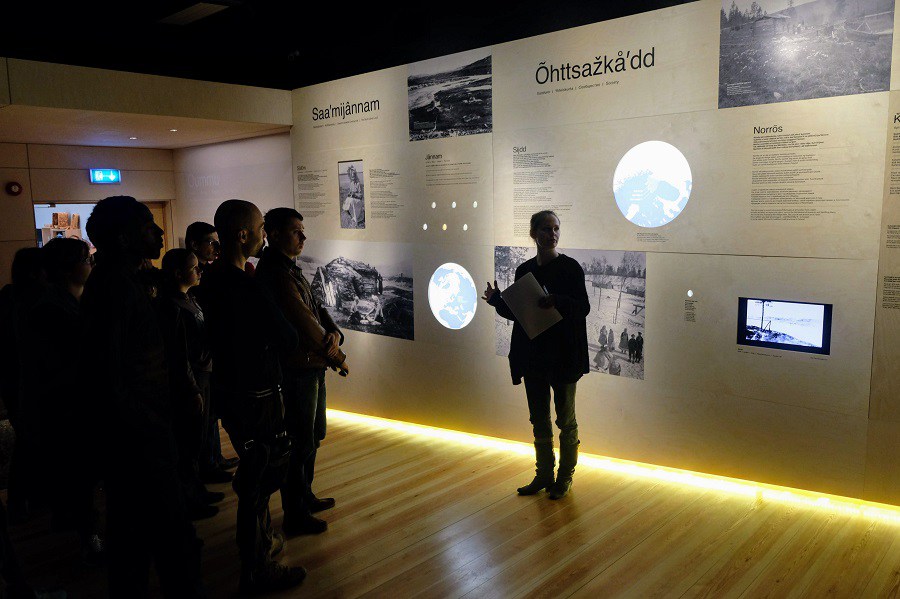 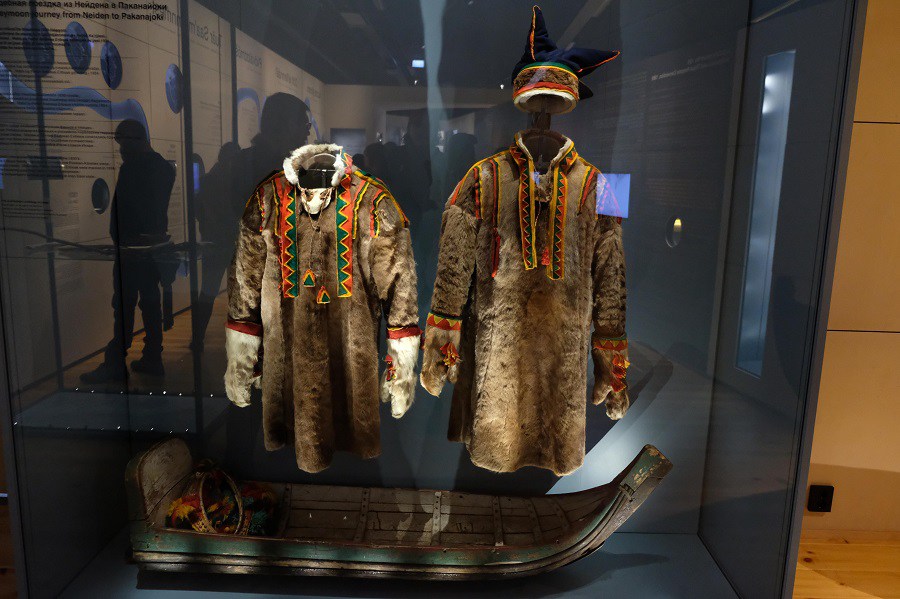 Clothing worn by Skolt Sami on their honeymoon on display at the museum. (Mia Bennett/Cryopolitics) 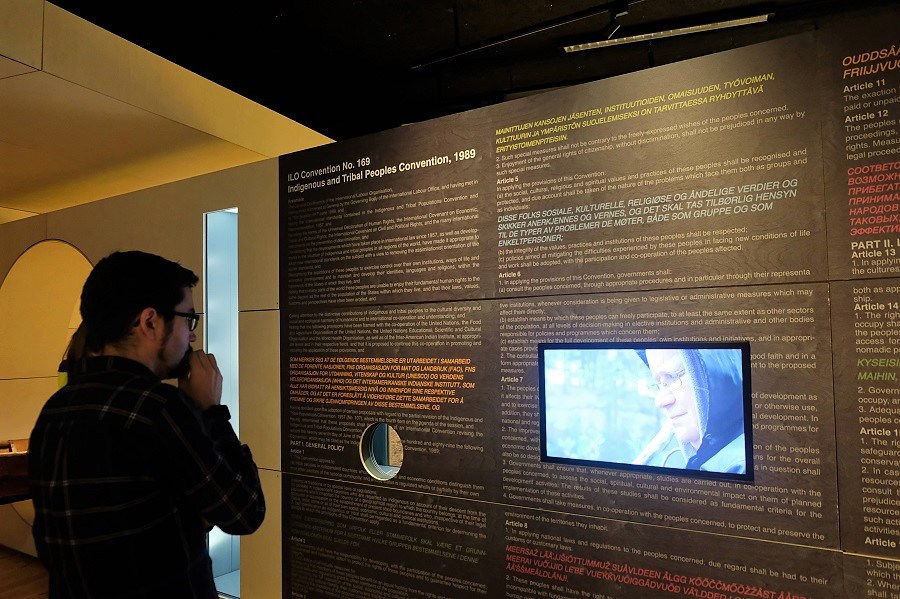 A display on ILO 169, the Indigenous and Tribal Peoples Convention (which Norway has signed, but Finland, Sweden, and Russia have not), at the museum. (Mia Bennett/Cryopolitics)

In the meantime, the situation is more hopeful in Finland – a difference which underscores how seriously national borders have divided Sámi cultures, attitudes, and outlooks. This year, the Sámi Educational Institute saw six out of 15 of the students enrolled in its language program graduate. Now, the school is taking its language program to Russia so that it can be adapted for use there. Some Sámi daycare centers in Helsinki and other places in southern Finland have opened, while Sámi is even taught in some ordinary Finnish schools.

As with reindeer herding, the internet is vital to providing instruction to those interested in learning about Sámi culture. This is especially the case for students who can’t travel to Inari, which is worlds away from the capital of Helsinki on the shores of the Baltic Sea. “Through remote access, it is also possible to discuss everyday topics with a native speaker of a language. The usage of a language becomes a natural part of everyday life,” said Ljetoff. The Skolt Sámi reindeer herder observed that without the institute, “silent knowledge” and “silent culture” would have possibly been lost, especially for students living in southern Finland.

The Skolt Sámi’s use of the internet demonstrates how certain technologies can actually help traditional and indigenous cultures thrive. Other inventions of the modern era, like railways, however, can irrevocably harm age-old practices. The mayor of Rovaniemi, in discussing plans for an internationally-funded Arctic Railway from his city to the north Norwegian coastline, claimed, “I think there is always a way to compromise.” But this is not always possible when one form of land use may destroy the possibility for another form to continue. If the Arctic Railway is built, Sámi reindeer herders will have to adapt, demonstrating once again their capacity to be far more flexible than the iron rods tied into the ground that may soon get in their way.

Canada: From the Arctic to Atlantic, a photographer documents seal hunting in Canada, Eye on the Arctic