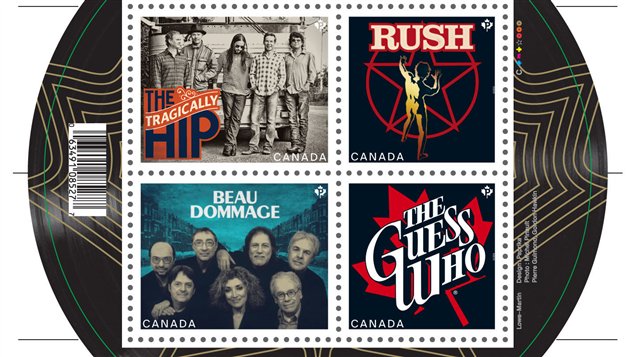 With legendary Canadian rock band Rush, just inducted into the Rock Hall of Fame, Canada Post announced the coming release of stamps which feature the band.

One of four to be released to the public in July, the Rush stamp features the ‘Starman” emblem from their 1976 album called “2012”.

Rush  has sold 40 million albums worldwide, placing them third behind the Beatles and Rolling Stones for the most Gold and Platinum records by a rock band. They will be embarking on a major international tour this month and throughout the summer which takes them through the US, Europe, and Canada.

Other bands to be featured in this grouping include the Guess Who, which was formed in 1962. A marketing ploy gave them a name change from Chad Allen and the Reflections, to the Guess Who, now recognized worldwide.  Through some membership changes, the band has sold millions of albums worldwide and have had 14 top 40 hits.

The Tragically Hip formed in 1984 in Kingston Ontario, taking their name from the Michael Nesmith movie, “Elephant Parts”. They have won numerous awards including 14 Junos (Canada’s national music award), have sold millions of records and continue to enjoy mass popularity.

Beau Dommage was formed in 1973 and helped define Quebec’s emerging music in the 70’s. Their first album in1974 broke sales records, and their second album went platinum, with over 100,000 units sold in the very first day.  They broke up in 1978, but reformed for an album in 1994.  In 2005 they appeared at the FrancoFolies in Montreal and were honoured by their peers, and are now considered both pioneers and legends in the Quebec music scene.

This new set is another in the series of legendary Canadian recording artists which Canada Post began in 2007. First to appear were Gord Lightfoot, Paul Anka, Joni Mitchell,  and Anne Murray. Since then a number of other great Canadian artists have been featured, although this set marks the first time bands have been honoured.