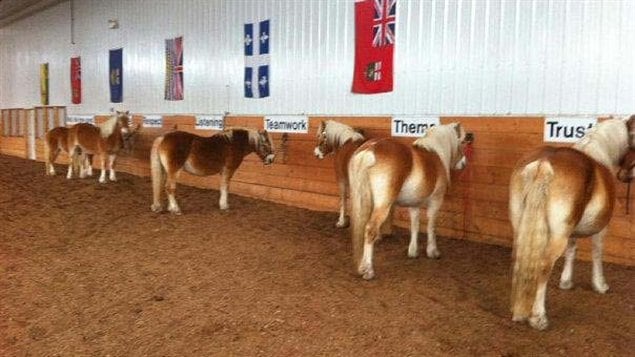 Can Praxis Haflinger breed horses ready to help soldiers and their families to understand how others perceive them
Photo Credit: Can Praxis

Post traumatic stress disorder, PTSD, can be very difficult to deal with.  For soldiers who have often seen horrors, and sometimes been subjected to them, it can be especially difficult

A new therapy is being developed to help both the soldiers and their spouses deal with the issues,

Steve Critchley, a former military man himself, knows and understands the soldiers situations.  He is co-founder of Can Praxis, a ranch and therapy in the beautiful and peaceful setting of Rocky Mountain House, a town about halfway between the major centres of Calgary and Edmonton in the western province of Alberta.

While Steve Critchley brings his understanding of military life and mediation to the programme, co-founder Jim Marland is a successful psychologist who has used horses as part of his practice.

The military life is often a difficult one for soldiers returning to civilian situations. It can also be difficult for their families. In the military, things tend to be rather black and white, and clear, where orders are obeyed, usually with very little or no question. Civilians and families however live in a world of many shades of greay and where borders are often fuzzy.

This situation is then exacerbated for soldiers suffering from PTSD with its internal confusion, conflict, and anxieties, and also for spouses and families in understanding how to deal with them and also their own frustrations

The  Can Praxis therapy is not designed as, nor expected to be, a cure for PTSD  Rather it is to demonstrate in a tangible way to the soldier how his or her actions, tones, and moods are perceived by others.  This is often extremely difficult for the soldier to realize on their own.

Horses, as a prey animal are very attuned to moods and actions of anything near them and by working with the horses, the soldier begins to understand how seemingly small actions  and tones can be perceived as threatening or at least overbearing, by others.  Even non-verbal moods can be detected by the horses.

Unlike some other “therapies”, Can Praxis wants spouses to be present. This is in order to help both parties to a better understanding  of the other’s situation and to improve communications.

Thanks to the financial aid of veterans support groups, like Wounded Warrior, and Veterans Affairs Canada, the cost of the therapy for veterans is covered.

So far only a small number have been through the experience, but both those soldiers and their spouses, say the experience has been a very beneficial one that will help along the difficult road to recovery