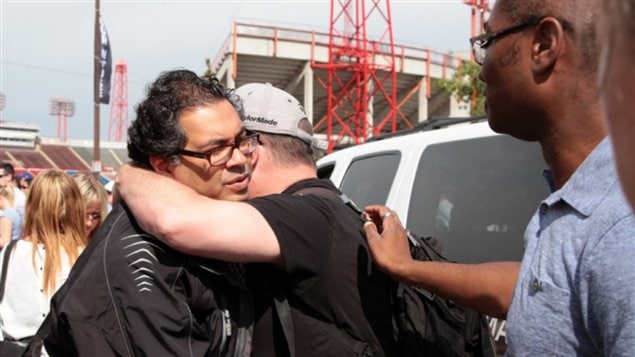 City of Calgary Mayor Naheed Nenshi hugs volunteer. He has been a comforting presence with flood victims and volunteers helping in the cleanup.
Photo Credit: John Rieti/CBC

“A roar of applause greets Mayor Naheed Nenshi as he ambles up upon a riser above thousands of Calgarians gathered in a stadium parking lot to volunteer with flood relief efforts.” That’s the first sentence in a CBC news report on the mayor of the City of Calgary on Wednesday (June 26).

It’s an indication of how his almost continual presence throughout a flooded city and on Twitter have garnered him almost hero status, at a time most politicians try to just get respect.

But the mayor can also be tough, chiding citizens for risking their lives and that of others by going too close to flooding rivers, and by questioning inspection standards of a railway bridge.

Some of the tweets:

If you are in a non-evacuation zone. (http://t.co/GZAMtyckja home) prepare for potential power outages. Charge your devices, save your work.

I'm home. Just a couple of things in the next few tweets before I finally get my #nap4nenshi:

1. I just returned from an aerial survey of the city. There are some pretty shocking water incursions. Clean-up will
Take a long time.

Next update at 7:45 pm. News on schools and (hopefully) re-entry into some neighbourhoods.

I'll give my next briefing at 10:15. Some new flow numbers and what to expect today. Folks working through the night again to keep you safe.

It's becoming difficult for me to answer direct questions on twitter in a timely way. @PrairieIslander @joshyyc and @erinchrusch will help.

Good morning! I have just a tonne of updates overnight. Things are moving in the right direction! But please avoid downtown still if you can

SE Calgary folks: if there is any way you can stay home this morning, please just stay home until we get roads opened.

Thanks for all your tweets to #nenshilive last night. I've asked @PrairieIslander to go through the hashtag and answer remaining questions.