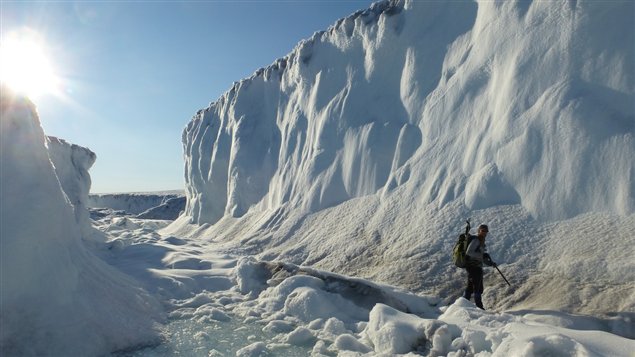 Researcher at the bottom of a new crevasse in the floating Milne Glacier Tongue.
Photo Credit: (© Andrew Hamilton 2013)

Eye on the Arctic – Understanding the Milne ice shelf

The last fully intact ice shelf on northern Ellesmere Island in Canada’s Arctic may soon be slipping away.

Ice shelves found in the island’s North are formed from sea ice and glacier ice and measure some 100 metres thick.

While other ice shelves nearby have long since broken up, the Milne ice shelf remained intact blocking the mouth of the Milne Fjord.

But this year, scientists have noticed fractures to the Milne ice shelf that indicate it may be reaching the end of its life cycle.

“It’s become a maze or a network of many different crevasses which very much indicates that the ice shelf is reaching its structural integrity limit,” says Andrew Hamilton, a Ph.D candidate at the University of British Columbia in Vancouver, Canada, who studies the Milne ice shelf.

“In the coming years it will most likely continue to break up and eventually float away as ice bergs or ice islands into the Arctic ocean.”

To find out more about what’s happening and what it can tell us about the changing North, Eye on the Arctic’s Eilís Quinn spoke to Andrew Hamilton about his findings.