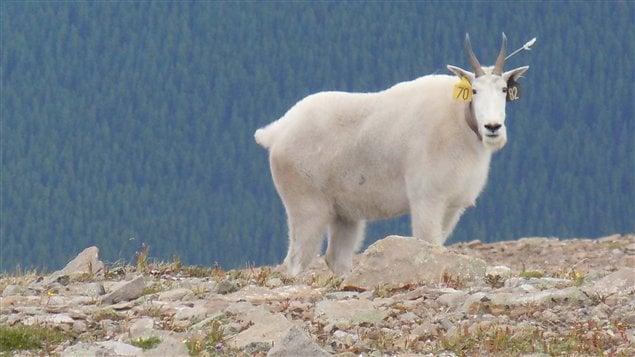 Because few fossils of ancient mountain goats are available, little is known of their evolution
Photo Credit: Lillian Girard

Most of us have seen many images of mountain goats, but surprisingly it seems there’s not much scientific knowledge about them. That’s partly due to the fact they live in a harsh and not easily accessible environment.

A University of Alberta doctoral student, Aaron Shafer, set out to learn more about their evolution and won a national dissertation award for his research.

I reached him at Uppsala University in Sweden where he is currently a post-doctoral fellow studying pinnipeds (seals, sea lions, walrus)

It seems we don’t know a lot about their evolution, nor those of other similar species who live in the mountains of western and northern Canada and the US because there are virtually no fossil records to study.

Unlike other species whose bodies may have sunk into prehistoric mud, and /or have been preserved by being trapped in permafrost, the ancient “goats” bodies lay exposed in the rocky and harsh mountain climate and the bones broken up, scattered and simply disappeared.  This makes it difficult for researchers to trace their genetic evolution.

As it turns out mountain goats aren’t really goats. Dr Shafer’s research has led to an understanding they belong to an antelope genus and may be genetically linked to musk-oxen which may be their closest known relative.

It would also appear that the many goat, sheep, and antelope species split from a common ancestor many millions of years ago, but tracing that split has proven elusive due to the lack of fossils and DNA availability.

Aaron Shafer’s work also was able to examine how the species adapted to the ice age with herds migrating both south beyond glaciation, and to small glacier-free areas in the north.

He points out that migration and mixing of herds through the mountains is important to provide genetic diversity a species needs for viability and survival.  He says that as global warming changes that high mountain environment it may limit the species ability to travel and may isolate groups.

He points out that after studying the genetics of the species he is more fascinated than ever and has found many new questions he hopes to research in the future.