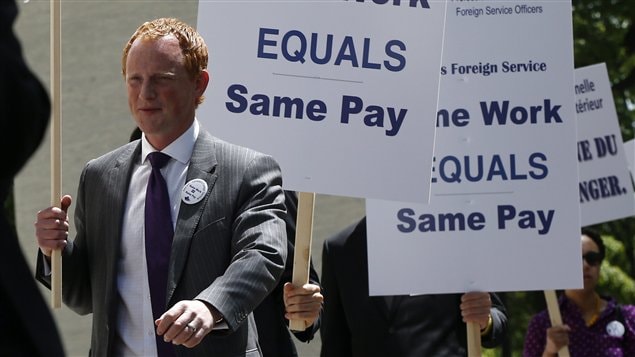 Tim Edwards, president of the Professional Association of Foreign Service Officers, with other Canadian diplomats demonstrating in Washington May 3, 2012.
Photo Credit: Charles Dharapak/AP

Canada’s Public Service Labour Relations Board has ruled the Canadian government has been bargaining in bad faith in its negotiations with striking diplomats. It says the government “violated its duty to bargain collectively in good faith and make every reasonable effort to enter into a collective agreement,” concluded the board.

The board did not recommend any remedial action on the part of the federal government. It “encourage[s]” all sides to “renew their attempts at arriving at a mutually agreeable process under which final and binding determination … can be used to break their impasse, in the event that their inability to resolve their differences at the bargaining table continues.”

In a statement released late Friday afternoon, the president of the Professional Association of Foreign Service Officers (PAFSO) Tim Edwards said:  “Today’s decision shows it is time for the Prime Minister and the Government to do the responsible thing and reach a negotiated settlement which would put an end to this damaging strike.”

The processing of Canadian visas has been slowed around the world since the strike actions started. Negotiations with the government started in 2011.

RCI’s Wojtek Gwiazda spoke to PAFSO president Tim Edwards shortly after the ruling was made public about what will happen next.