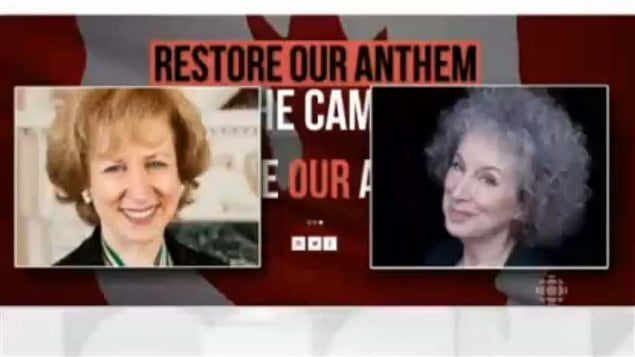 A group of prominent Canadian women wants to change some of the lyrics to the Canadian anthem , O Canada.

They say the lyrics exclude about 50% of the population, that is, women.

The group, which includes novelist Margaret Atwood and former Prime Minister Kim Campbell, would make the anthem gender-neutral as it was originally.

The original 1908 lyric was “thou dost is us command”. This was chaned in 1913  to, “ in all thy sons command”.  Some think this might have been to encourage enlistment as the First World War loomed on the horizon, although it appears there is no documented reason for the change.

RestoreOurAnthem.ca is being launched on the 100th anniversary of the change made to Judge Robert Stanley Weir’s original English lyric. The group suggests an updated linguistic version of the original, to wit; “ in all of us command”

Whether the federal governming Conservatives will take note of the compaign this time is not known, but in the 2010 Speech from the Throne for the governing Conservative Party under Prime Minister Stephen Harper, the announcement was made that Parliament would review the “original gender-neutral wording of our national anthem.”  The move was also supported at the time by Senator Nancy Ruth, who is also a member of this new group

However, there was an immediate backlash, with a poll suggesting three-quarters of Canadians were against a change.  Two days after the Throne Speech, a spokesman for Prime Minister’s Office said the anthem would be left as is.

As for this latest campaign, the Official Opposition NDP says the anthem is good as is.

New Democratic Party leader Tom Mulcair said yesterday in Ottawa, that the anthem shouldn’t be altered when it comes to gender.

“I think that when you start tinkering with an institution like a national anthem, that you’re looking for problems,” he said when asked about the proposal.

“We seem to have agreed on the English and French versions as they are and I think that’s probably a good thing.”

Supporters point out that the English version already incorporates changes recommended by parliamentarians in 1968 that added the lines “from far and wide” and “God keep our land.”

The inclusion of “God” in the anthem is also being raised as a point of contention.