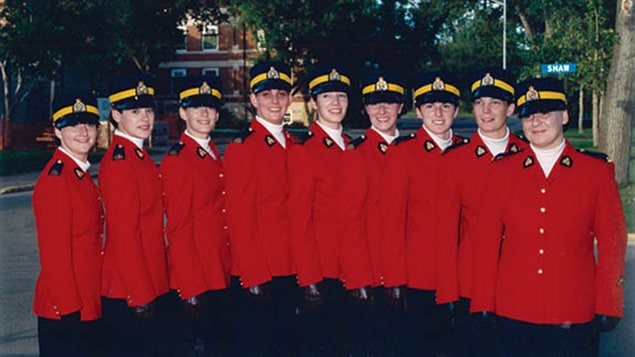 Former Constable Janet Merlo, the lead plaintiff in a proposed class-action lawsuit against the RCMP alleging widespread harassment and discrimination. Her just released book called "No One to Tell", details her 20-year career with the force. She is pictured (far left) at her graduation ceremony in 1991.
Photo Credit: courtesy J Merlo

One of the iconic symbols of Canada, are the “Mounties”, the Royal Canadian Mounted Police (RCMP) who are very often seen in their parade-dress red serge jackets standing near dignitaries at official ceremonies.

But the Mounties are more than mere colourful ceremonial backdrops. They are a national paramilitary force who perform a wide variety of policing duties in many regions across the country, from handing out traffic tickets, to investigations of domestic terrorism.

Former Constable Janet Merlo said she always wanted to do policing, but that dream was severely damaged during a 20 year career with the RCMP, not because of the type of work, rather the internal resistance and cultural antipathy towards women in the macho force. This is shown in her new book, “No One To Tell: Breaking My Silence on Life in the RCMP”

During a 20 year career with the force, the moments of pride and satisfaction with former Constable Merlo’s job were too often overshadowed by sexist remarks, harassment, and double-standards in treatment of male and female members.

This has led to her becoming the lead plaintiff in a proposed class-action lawsuit alleging widespread harassment and gender-based discrimination in the RCMP.

She says the culture within the Mountie organization was one of silence, do not create waves.

“You just don’t speak out against those who outrank you,” she writes, which is why no-one dared to say anything about a particular sergeant who always came to work drunk.

After she complained about an understaffing problem during shifts, she was berated and labelled a “big-mouth”

In another instance, when she became pregnant, she says a senior officer berated her, asking: “What am I supposed to do with you now?” and telling her, “Next time, keep your (expletive) legs closed.”

She says her book is called “No One to Tell” because there simply was no-one she or other women could complain to about problems. Some were caused by superiors, and in other cases superiors simply refused to listen or take action with the sole result that you would be labelled a troublemaker.

“We kept our mouths shut, and we allowed the horrible things we’d experienced to take root inside us, just as we allowed the rot within our organization to proceed unchecked,” she writes.

The book is not all criticism of the force, as she mentions several cases where she mentioned the good work many members do, and instances of personal satisfaction.

However after an extended stress leave in 2010, she quit the force.

In response to the book being released today, RCMP an spokesperson says the agency is making a concerted effort to change and become an inclusive force where people can come forward and where wrongdoers are held to account.

Janet Merlo says policies like that were already in place, but have simply needed to be enforced. She hopes her book will help lift the veil of secrecy within the force and eventually create better conditions for all.