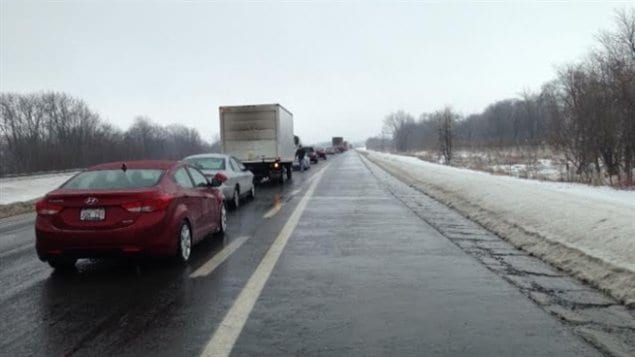 Drinking can make it look like a person is driving through a moderate snowfall or a very light fog, says researcher.
Photo Credit: Stephanie Domet

Drinking the allowable limit of alcohol permitted for driving can impair vision by 30 per cent according to a new study. Researchers at Western University in Ontario found that alcohol consumption reduces the ability to adjust vision for brightness and contrast, which can be problematic when visibility is reduced.

While 30 per cent is not a huge loss of vision, “it would be like driving through a moderate snowfall or perhaps a very light fog,” says Brian Timney, research scientist and dean of Western’s Faculty of Social Science. “In normal circumstances that would not have much impact on what a person could see, but in more extreme cases where it was a heavy snowstorm or dense fog, it might make the difference between noticing something or not noticing something.”

Two drinks are the limit

The legal limit for driving is a blood alcohol level of .05 per cent in most Canadian provinces and territories. Consuming one or two glasses of wine or beer would not put most Canadians beyond that limit. However, if they do go beyond and are caught, drivers may be fined or have their licenses suspended and they may face higher charges for auto insurance.

Researchers used a grid of black squares on a white background called the Hermann Grid to run their test. It illustrates the way the visual system processes contrast or brightness.  Subjects used it when they were sober and again after drinking alcohol and the results were compared.

Not a huge impact, but a significant one

“Alcohol has an effect on human vision and a person’s visual sensitivity but it’s not a huge impact, so the notion of being blind drunk, for example, is probably an erroneous one,” concludes Timney. “And it (the study) tells us that the problems that people might be having after they’ve consumed alcohol are not because they don’t see things, but because there are other kinds of impairments that go on…

“It’s one more piece of information that says if you drink, you’re going to have some measure of impairment in different aspects of your system. In this case it’s not a huge impact, but when you take that along with the other kinds of things—the motor impairment, the attention deficit—then you’re going to be less able to do things normally…This (vision impairment) is one more thing that alcohol does that you need to be careful of.”

The study was published in the journal Perception.