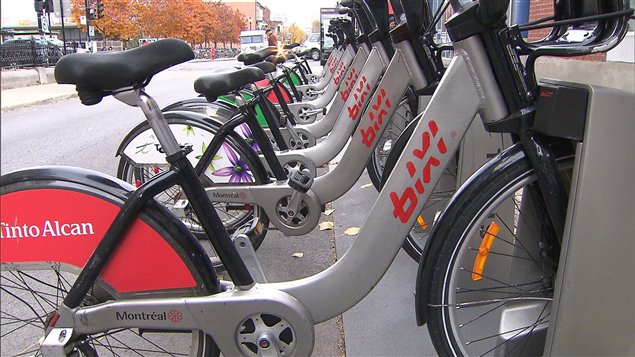 It was originally a bold plan to operate a bicycle sharing service.

It was promoted as being cool, it was a “green” way to get around Montreal or any city. It’s called Bixi-for bicycle taxi.   For an small annual fee, people can unlock and ride away on one  of 3000 bixi bicycles from any of the 300 public bisi parking docks around the city core. They then ride to their destination and drop it off in a locking dock nearby.

It was bold, but it lost money from the beginning, and has now filed for bankruptcy protection in spite of an earlier $108 million in public money in loans and guarantees from Montreal to bail out the company.

In a report released Monday, Montreal’s Auditor-General Jacques Bergeron said the city didn’t properly study the program’s feasibility before its launch. He also said the Bixi service will cost taxpayers millions for years to come.

The bike sharing service began in Montreal in 2009 operating as a non-profit company under the auspices of the Montreal Parking Authority. By 2010, startup costs had it running at a deficit of $30 million.

The idea of bicycle sharing and the bixi’s quickly caught on with other cities in Canada, Australia, the US and London England.

Ottawa, the national capital joined and started a trial also in 2009 year but that city wanted a private company to take it over. It did not return in 2010 as no private company was interested in taking on the programme. It returned to the capital in 2011 under the auspices of the publicly-funded National Capital Commission and remains in operation for the time being although still looking for private business to take it over.

Two years after its launch in Canada’s biggest city, Toronto, thanks to that city’s $4.8 million dollar loan guarantee, the Bixi system has been a money-loser and also appears headed to fail, or get taken over by the city with more public money. Toronto’s transport manager says Bixi had overestimated the number of subscribers and daily riders. Bixi had said revenue from sponsors, subscribers and occasional use riders  would cover operating costs, pay off the debt and possibly turn a profit which Bixi and Toronto would share 50-50

It should be noted that in the current Canadian locations, the Bixi system has to be taken down and reinstalled every year for several months of winter, which limits its useful time and adds to costs.

A Toronto city hall official says that excluding the debt costs, Bixi is still about $100,000 short of it paying its $1.5 million operating costs,

Elsewhere, in Melbourne, Australia; New York, Chicago, Washington, and elsewhere, the programme runs on public monies through environmental grants and government funding, under the idea that its an environmental initiative or part of the transit system meant to be subsidized.

Vancouver on Canada’s west coast has been waiting for two years to begin its bicycle sharing programme. The mayor, Greg Robertson says the Bixi company’s bankruptcy won’t affect its plans though it would use Bixi bikes.

Vancouver had chosen the American company Alta Bicycle Share of Portland to run its programme. Alta would use bixi bikes which it also uses for its programmes in New York, Chicago and elsewhere

It’s not clear what Alta will do now.

Vancouver had committed to about $7 million in startup costs and  $500,000 annually for ongoing signage and staff work.

Montreal’s new mayor, Denis Coderre says Montreal which is taking over the operation, will have Bixi bikes on the streets this summer. He added Bixi has been trying to sell its international operations but has had no takers so far.