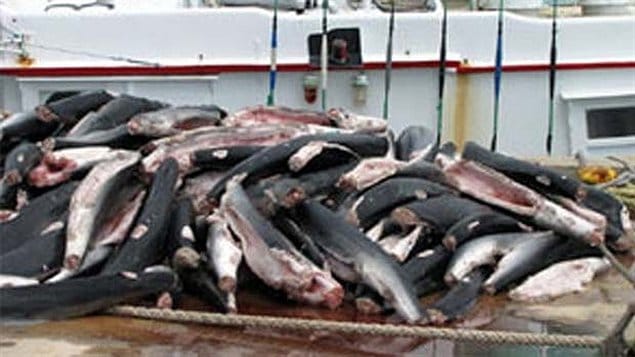 Hundreds of dead and already finned sharks were seized from a Taiwanese fishing vessel in Palau in August 2011.
Photo Credit: AP-Micronesian Shark Foundation

Sharks and rays: extinction of some species is possible

A new, global study on the situation faced by the ocean’s sharks and rays, says they may face extinction in the next few decades.

Nick Dulvy, is a Simon Fraser University (SFU) Canada Research Chair in Marine Biodiversity and Conservation in British Columbia, conducted the study. He is also co-chairman of the Shark Specialist Group (SSG), a section within the The International Union for Conservation of Nature.

The study has just been published online in eLIFE Sciences.

It reveals that one-quarter (249) of 1,041 known shark, ray and chimaera species globally fall under three threatened categories on the IUCN Red List

Professor Dulvy says, ”There are no real sanctuaries for sharks where they are safe from overfishing.”

The study says overfishing is particularly prevalent  in the Indo-Pacific region, especially the Gulf of Thailand, and in the Red Sea and Mediterranean Sea

It is estimated that the fins of between 26 and 73 million individuals, worth US$400-550 million, are traded each year. The landings of sharks and rays, reported to the Food and Agriculture Organization of the United Nations (FAO) however are actually likely to be 3 to 4 times greater as the trade in fins is largely unregulated in over 80 countries around the world.

The report relies on consensus assessments by more than 300 scientists. It notes however that due to uncertainty with some of the data, their analysis of the threat to these sharks and rays, as dire as it is in some cases, may be underestimating the true risk.