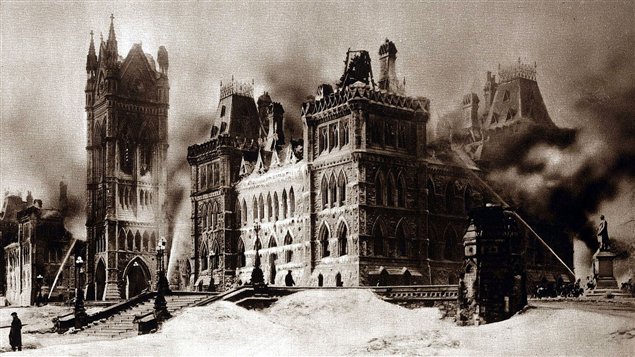 Still fighting the fire in the early hours of February 4, 1916
Photo Credit: wiki

The huge and impressive Gothic stone and wood Parliament had dominated the skyline of Ottawa, the capital of the young country for just over 50 years.

The Centre Block of Parliament on Barraks Hill- now Parliament Hill, as it appeared prior to the fire of 1916 (photo:D.A. McLaughlin- Library and Archives canada)

Late in the evening of February 3rd, 1916, as the First World War raged in Europe, smoke was seen escaping from the reading room of the Centre Block.

The fire spread quickly and by 21;30 the roof collapsed, and in the early hours of February 4th, the clock tower collapsed.  Seven people died in the blaze.

By the next day, the fire was out, but the structure was a smouldering icy shell.

Only the Parliamentary library, a magnificent design by itself, was saved thanks to a short passage separating it from the Centre Block, and two heavy iron doors which had been shut by a clerk just in time to keep the flames and smoke out.

With the war raging, the fire was widely rumoured to be an attack by saboteurs, however although never determined, its now thought that it began with a carelessly discarded cigar into a waste basket. Another theory is an electrical fire as the reading room had only recently been wired for electric reading lamps.

At the time it was begun, it was the largest construction project in all of North America. In 1861, cost overruns caused the unfinished site to be closed until 1863 following a commission of inquiry.

Although still incomplete, the buildings were ready for politicians to occupy just in time to celebrate Canadian confederation of the new “Dominion of Canada”, with the former united province of Canada, split into the provinces of Ontario and Quebec, along with the former British colonies of Nova Scotia, and New Brunswick.   By 1876 the buildings were complete with the Victoria Tower as the central feature over the main entrance to the Centre Block.

With the addition of other provinces into Confederation, many politicians and staff felt cramped, and although it was generally thought  the stone shell was still solid, it was hastily decided by committee that it was unsafe, and had to be completely torn down and a new building created.

The Centre Block of Parliament as it appears today with the central Tower of Victory and Peace, more commonly known as the Peace Tower which houses a carillon, clock, and the Books of Remembrance of Canada’s war dead.

Rebuilding of the Centre Block was begun immediately but mostly in a similar arcihtectural style to the original, The first sitting in the “new” House of Commons was in 1920, with the building completed with the opening of the new tower in 1927. It now named the Peace Tower  (officially the Tower of Victory and Peace) to honour the 1918 Allied victory, the armistice and the fallen of First World War.  At 92 metres tall, it far exceeded the previous 55 metre Victoria Tower and contains a large 53-bell carillon and clock.

Continuing detail and finishing work on the building would continue for the next several decades.

Since then restoration work goes on and upgrades take place on a regular basis.