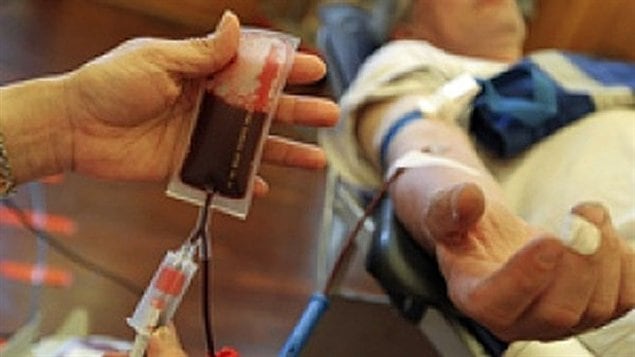 A private company is ready and awaiting licensing in order to start paying people for their blood plasma. Many are concerned about the implications for safety, and for nibbling away at Canada's long tradition of voluntary blood donation
Photo Credit: CBC

Donating blood can save lives. In Canada, voluntary donors fill out a a simple questionnaire. accepted on trust, which designed to screen out high risk individuals.

Unlike the situation in the United States, currently in Canada people donate blood for free as an altruistic gesture to help others. The blood in turn is collected and distributed in all provinces except Quebec by Canadian Blood Services, a non-profit national agency.

In the 1980’s the distribution of tainted blood bought from the US in the 1980’s infected thousands of Canadians with HIV and Hepatitis C.

The blood had been collected mostly from US prisoners, paid for their blood, and it led to a huge scandal and ultimately to a federal commission of inquiry led by Justice Horace Krever. In his final report, he made several sweeping recommendations, including that Canada not pay people for blood collection.

The issue of paying for blood arose again early last year when a company proposed setting up shop in the province of Ontario to pay donors for blood plasma.

The payment would be about $25 per session in which blood would be taken from the person, run through a centrifuge to separate and remove the plasma (mostly water and proteins from the red blood cells and platelets) and then the blood returned to the person.  Plasma contains many specialized proteins (antibodies) that aid in fighting infections and can be used to make life saving medical products, such as immunoglobulin

The western province of Manitoba has allowed pay-for plasma collection for almost 30 years, however, only from people with rare blood types.

The controversy has arisen yet again as at least one company is now almost ready to begin its pay-for-plasma operation in Canada’s most populous province, Ontario.

Health is a provincial jurisdiction, but the Ontario Ministry of Health had asked the federal agency to look into the issue and conduct public consultations.  Although that report is expected later this year, the final decision remains at the provincial level.

Quebec is the only province that so far has instituted an outright ban on private-paid blood collection, which was one of the main recommendations of the Krever Commission.  In his 1997 report, Justice Krever said voluntary donation is safer because “paid donors “may have an incentive to donate even when they know they should not”

Another result of the Krever Inquiry is that blood products now go through a much stricter testing regime. But, critics say they can only test for pathogens they know exist. They say that for years medical professionals didn’t  know HIV existed and then later, whether it was a virus or bacteria.

Critics also echo the finding of Justice Krever saying that pay-for plasma collectors would on the one hand take away potential donors for whole blood collection, which is still always needed, and on the other, put them on a collision course with high-risk individuals who need cash.

The Ontario operation would set up clinics near a university and a homeless shelter. Unlike the Winnipeg, Manitoba operation, this one would accept plasma from anyone aged 17-65 who fills out the standard questionnaire about their habits and lifestyle.

In defence of the operation, tthe CEO of the Ontario company said no-one will be paid until the blood has been screened and found safe.

Proponents of the pay-for-plasma idea also say what most Canadians don’t realize is that Canada still buys about 70% of its plasma needs from US sources,

Meanwhile, victims, and surviving family and friends of victims of the 1980’s blood infections are expressing great dismay and concern over the proposal to pay for blood product collection, with many saying lessons should have been learned from that tragic situation.