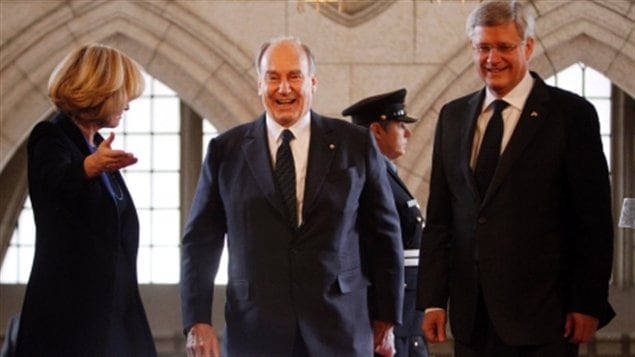 The Aga Khan – Imam of the Shia Imami Ismaili Muslims, visited Ottawa and Toronto last week.  Invited by Prime Minister Stephen Harper to address a joint session of parliament, the Aga Khan was the first faith-based leader to speak to the House of Commons in 75 years.

The spiritual leader of 15 million people around the world was visiting the growing community here.  Many Ismaili muslim families came to Canada when they were escaping Idi Amin’s Uganda in the 1970’s.  Now there over 100.000 members.

The Aga Khan Development Network, a private charity that focuses on education, job creation, and cultural expression, works to improve the lives of people in the developing world, particularly in Asia and Africa, regardless of of faith, race or gender.  The Canadian government has partnered with the AKDN on several initiatives beginning with a private nursing school, established in Pakistan with the help of McMaster University.

There are six Ismaili Centres around the world; Canada will soon have two.  The Global Centre for Pluralism in Ottawa, and this summer the Aga Khan Museum is expected to open in Toronto.  In his address to Canada’s parliament, the Aga Khan described it as, “an important testimonial in a Canadian setting to the immense diversity of Islamic cultures.”

In a television interview with the CBC’s Peter Mansbridge the Aga Khan described his intention: “Well I hope that this centre will learn from the Canadian history of pluralism because I think Canada is a country that has invested in making this potential liability become an asset, and I think that Canada has been perhaps too humble in its own appreciation of this global asset.”