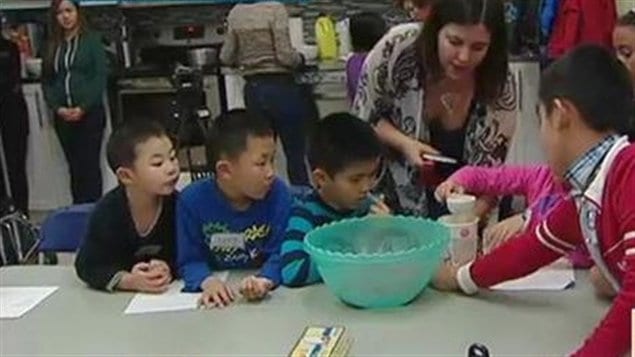 Learning to cook is as important a skill as numeracy and literacy, says author.
Photo Credit: CBC

Canadians tend to call their children to dinner, rather than get them to help make it and that is a problem according to author Sarah Elton. “It’s important for kids to know how to cook. It’s just as important a skill as numeracy, literacy. It’s a life skill that will serve them their entire lives.”

Only one quarter of Canadians eat a homemade meal made from scratch every day, according to the government department, Industry Canada. That compares to half of families that did so in 1992. People often pick up processed foods, or foods cooked by supermarkets or restaurants.

Parents will often say they are too busy to cook, but Elton says that is what food companies have led them to believe through extensive advertising. And the companies spend a lot of money developing products which are attractive and require little work to prepare.

Studies indicate that 80 per cent of the salt North Americans eat comes from processed foods and too much salt has been proven to have negative health effects. Elton says it’s time for Canadians to take control of what they are eating by making it themselves and deciding how much salt, sugar and fat to put in.

Children can help very early in their lives says Elton. When her two children were toddlers she had them cutting mushrooms with butter knives, which were not at all sharp. And she says it is also never too late to involve older children in cooking.

Cooking is a creative act, says Elton in her latest book Starting from Scratch: What You Need to Know About Food and Cooking.  As a food writer, she has travelled to countries like China, India and France and notes that people there often involve their children in preparing food. In France they even send children to extra-curricular classes to learn how to cook.

Cooking from scratch is much less expensive, can lead to better health if one is controlling sugar, salt and fats, and she says it is an important expression of culture that should be maintained.

“Cooking makes us happy,” says Elton. “Sharing home cooked food with the family that you’ve prepared yourself from scratch is a very simple way to connect with your friends and your family, and to have joy in your home.

“If we lose this, that would be very sad.”