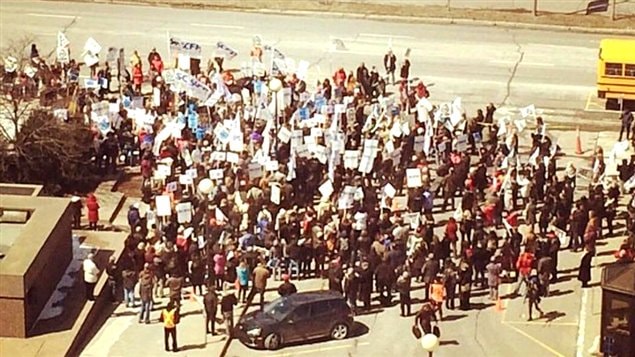 A noisy demonstration Wednesday (April 15) by employees, unionists, and some politicians in front of the French headquarters of CBC/Radio-Canada called for a moratorium on cuts at the national radio and television public broadcaster.

The $130 million dollars and 657 job cuts were announced April 10, in a televised town hall meeting with employees. “Today, we have made the tough decisions necessary to balance our current budget,” said Hubert T. Lacroix, President and CEO of CBC/Radio-Canada.

The Wednesday demonstration in Montreal was organized by unions representing the broadcaster’s employees in the province of Quebec and the city of Moncton. According to one union president, Alex Levasseur of the Syndicat des communications de Radio-Canada (SCRC), CBC/Radio-Canada has cut 2000 employees in the last five years.

The union is calling for a moratorium on the cuts, and a parliamentary commission on the future of the CBC/Radio-Canada.

According to one study commissioned by CBC/Radio-Canada and released in October, 2013: “Among 18 major Western countries, Canada was third in terms of the lowest level of per-capita public funding for public broadcasting in 2011.”