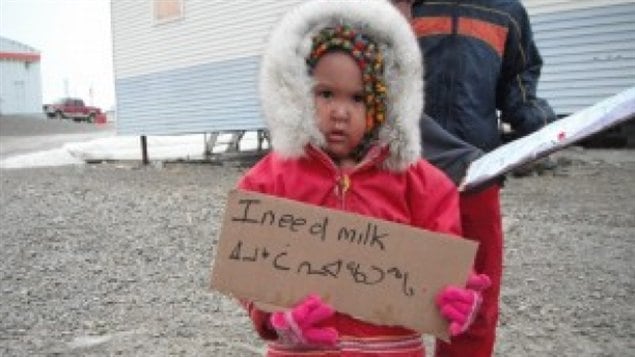 A child holds a sign at a protest against high food prices in the remote territory of Nunavut in June 2012.
Photo Credit: Genevieve Nutarariaq/Facebook

Research has shown that Nunavut has the worst access to safe and healthy food in Canada. A 2007-2008 survey found more than 70 per cent of Inuit households in Nunavut are food insecure. That is eight times the national average.

Nunavut is remote and food supplies have to be flown in making the cost of food exhorbitant.

The Nunavut Food Security Coalition, made up of more than 20 organizations, calls for a plan to increase the kinds of traditional food people eat. It also it calls for more infrastructure for hunting and new ways to support hunters and harvesters.