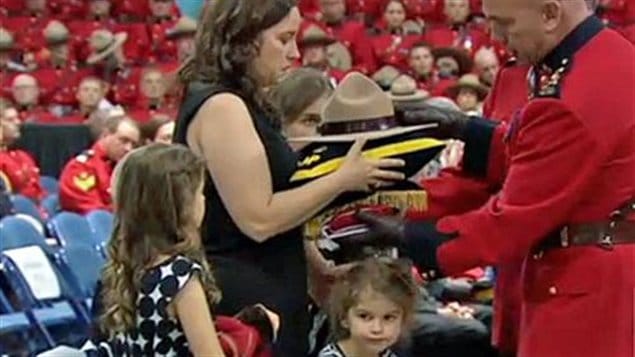 The flag that covered the casket of Const. Douglas James Larche is presented to his wife, Nadine, and their three daughters
Photo Credit: CBC

RCMP funeral for the 3 officers killed in Moncton shootings

Doug Larche, age 40, David Ross, 32, and Fabrice Gevaudan, 45, were laid to rest in a ceremony that began with a procession through the city to the Coliseum where over seven thousand mourners gathered.

The three officers were shot last Wednesday evening when they responded to reports of a man with firearms in a residential neighbourhood. The shootings led to a massive manhunt and a lockdown of the city that ended 30 hours later following the arrest a 24-year-old man.

Prime Minister Stephen Harper, attended the funeral and paid tribute to the three officers.  He told the crowd of mourners that “the grief is shared by all Canadians from coast to coast.” He said, a “searing grief” rippled throughout New Brunswick as “we struggle for answers.”  Harper said, “We ask what in God’s name happened here and why. We may never know,” Harper said, calling what happened to the fallen officers and the community an “outrage.”

Moncton resident Justin Bourque is charged with three counts of first-degree murder and two counts of attempted murder. He is scheduled to be in provincial court July 3