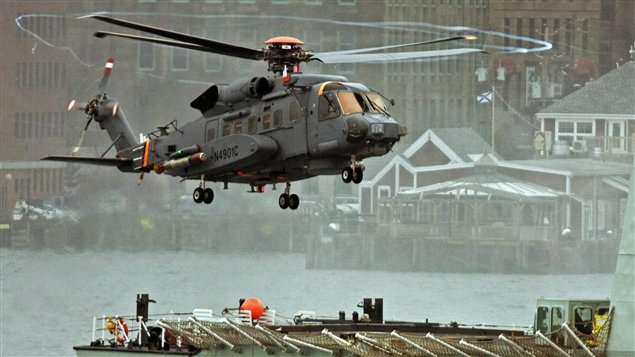 The Canadian government has announced a deal to take delivery of 28 Sikorsky CH-148 Cyclones. But the maritime helicopters will not meet a 30-minute run-dry capability that was a key safety requirement, according to CBC News.
Photo Credit: Andrew Vaughan/CP

The Canadian government has agreed to accept new helicopters to replace Canada’s 50-year-old fleet of Sea Kings even though they don’t meet a key requirement recommended for marine helicopters by Canada’s air safety investigator, according to a report from CBC News on Monday (June 23).

Last Wednesday the government had finally signed a renegotiated contract with helicopter-maker Sikorsky for 28 new CH-148 Cyclone helicopters at a cost of $7.6 billion.

CBC News reports the government has agreed to forego a formerly mandatory safety measure: a 30-minute run-dry standard for its main gear box.

The importance of the ability to fly for 30 minutes after a loss of lubrication in the main gear box was reinforced by an investigation into a deadly 2009 crash of a Sikorsky-built helicopter.

In 2009, a Sikorsky-built Cougar Helicopter S-92 on the way from St. John’s, in the province of Newfoundland and Labrador, to an offshore oil platform crashed into the sea when two titanium studs securing the main gearbox failed, and caused a total loss of lubrication. All but one of the 18 people aboard died.