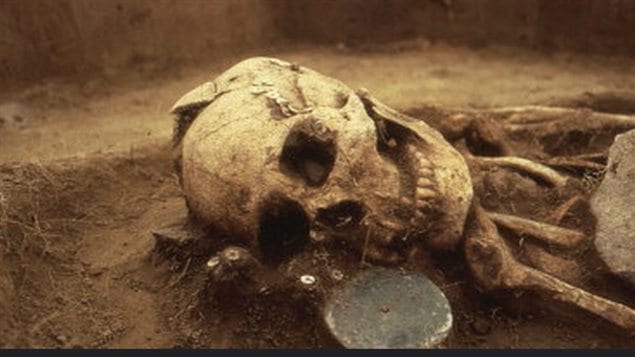 The Bronze-age skeleton of a man killed between 4420-3395 years BP (before present) in the Baikal region of present-day Siberia revealed an interesting anomaly after study at the University of Saskatchewan
Photo Credit: U Sask

The jaw of a Siberian man who was killed about 4,000 years ago, has revealed some interesting facts. Researchers at the University of Saskatchewan using the Biomedical Imaging and Therapy (BMIT) beamline at the Canadian Light Source synchrotron were able to study the jaw of the man to find out the details.

Angela Lieverse (PhD) was the lead researcher. She is an associate professor in the Department of Archeology and Anthropology at the  University of Saskatchewan

The skeleton, buried with care those thousands of years ago, was that of a man approximately 35- 40 years old, and typical in most ways of the people of the time, except for one thing.

He had the tip of an arrowhead lodged in the front of his jaw, and two teeth that were not there.

Researchers found that it was not the arrowhead in the jaw that killed the man.

They did find that the arrowhead was not the cause of the missing teeth, but that the injury was “recent” occurring near the time of death.

This lead to speculation that another wound may have killed him, but something that was not traceable on the remaining skeleton.

The advantage of the Canadian synchrotron is that, unlike many other techniques in such research,  it can get extremely detailed images without any destruction needed to the original specimen which remains completely intact and undamaged after the process.

They found that a broken arrowhead found buried with the man matched that of the reconstructed fragment.

What is also interesting is that there is very little record of violence among the people in this region. Indeed, this is only one of three specimens dating from this time period showing evidence of violence, however, professor Lieverse says “ an arrow shot into somebody’s face is probably not an accident. You can say with some certainty there was an intention of violence”

They also discovered that the real cause of the missing teeth was a very rare genetic disorder.  Using this rare condition, this discovery will help other researchers in efforts to trace ancient human migrations.

This research is part of the Baikal-Hokkaido Archaeology Project (BHAP) based at the University of Alberta and funded largely by the Social Sciences and Humanities Research Council of Canada.