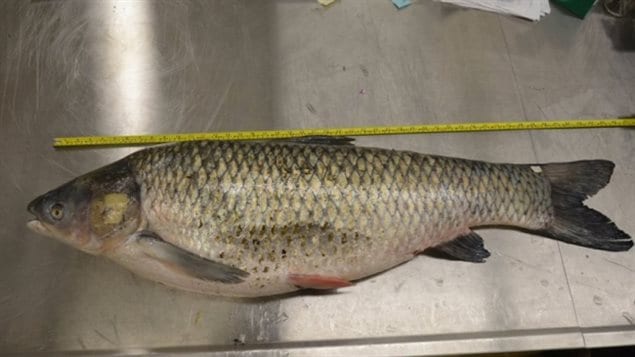 Some 45 Asian carp (grass carp shown) have been caught in the Great Lakes basin between 2007-2012. Fears are that if the fish begin to breed, they will quickly eradicate out many native species
Photo Credit: Dept of Fisheries and Oceans

There are great fears about the ecological damage the Asian carp could do if it gets a foothold in the Great Lakes.  The big carp reproduce rapidly and eat vast amounts of plankton –the foundation of the food chain, thereby basically starving out native species.

A new research lab is being created in Burlington Ontario at the Canada Centre for Inland Waters (CCIW).

Bighead and silver carp have infested many rivers in the US already and could get into Canada through the many rivers and canals that cross borders and which enter into lakes along the border.

The new research lab will be able to test water and fish samples in Canada rather than having them sent to the US for analysis. This means results will be obtained much faster and will be much less expensive.

Forty-five Asian carp have been caught in the Great Lakes basin between 2007-2012, some in Lake Erie and some in tributaries, half of which could reproduce.

Government models show it would only take 10 male and ten female carp to ensure the species grabs a foothold.

The species was first brought to North America in the 1970’s. In the US for aquculture, and in Canada as a live food fish.  Many are thought to have escaped the aquaculture enclosures during flooding

Four staff, and 15 summer students are currently in Lake Huron and Lake Ontario with nets and electro-stunning devices to collect samples.

It has already been confirmed that Asian carp have reproduced within the Great Lakes watershed. An analysis of four grass carp captured in 2012 in Ohio’s Sandusky River, a tributary of Lake Erie, found they had spent their entire lives there and were not introduced through means such as stocking, according to researchers with the U.S. Geological Survey and Bowling Green State University.

Asian carp jumping on the Wabash River near Montezuma, In.