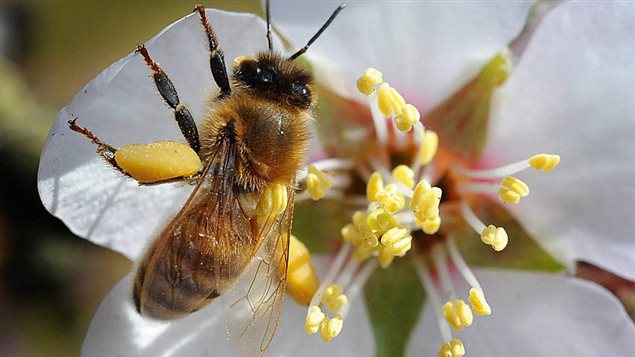 A bee loaded with pollen on its legs. As they gain experience foraging, bees return to the hive with more and more pollen. Bees exposed to neonicotinoids seem unable to learn.
Photo Credit: Michael McCollum/The Record/Canadian Press

A new study is indicating that popular insecticides coated on crop seeds are harming bees.

Bee deaths around the world have been increasing and are alarming scientists, beekeepers, and many farmers.

One of the most widespread insecticides is a group known as neonicotinoids, which act as a neurotoxin when absorbed by insects.  These are commonly found as a coating on seeds such as corn, soybean, and canola,

Other farmers however say they need these neonicotinoid-coated seeds to reduce crop damage from pests like aphids.

Nigel Raine, a professor and bee researcher at the University of Guelph says that young adult bumblebees normally take a bit of time to learn how to land on flowers, collect the pollen and pack it on their legs for transport back to the hive. As they gain experience, they get better at it and bring more and more pollen back.

The study, published in the British Ecological Society’s journal Functional Ecology, showed the bees exposed to neonicotinoids started out foraging worse than the unexposed control group of bees and never improved. He said in an interview, “In some cases actually their performance deteriorated. This kind of suggests that something is not allowing them to continue the normal process of learning how to handle flowers and collect pollen.”

The study noted that when bees were additionally exposed to a second type of insecticide, pyrethroid along with the neonicotinoid, the colonies were more prone to fail and the entire colony die.

In conducting the research, 40 new colonies of bees were allowed to forage in the wild for four weeks, long after planting was done and “neonic” dust during planting, and other exposure had diminished.

The bees were each tagged with its own specific RFID (radio-frequency identification), a miniscule tracking device weighing 2 micrgrams, to note each particular bee’s entry and exit from the colony. Observers then noted the amount of pollen carried and its colour (to determine the type of flower visited)

The bees exposed to pyrethroid had higher mortality while the neonicotinoid exposed bees would spend longer foraging, collected less pollen from different flowers than the control colonies, and often would return with no pollen at all with subsequent consequences for the growth or survival of the colony.

According to the Canola Council of Canada, almost all of the 21 million acres of canola planted in Canada are treated with neonicotinoids. Bayer Crop Sciences, one of the primary makers of the pesticide, reported that in 2012 that 90 per cent of U.S. corn was also treated.

‘Over the coming months I want to first consult with industry, farmers and environmental stakeholders on options that are practical, including the consideration of a licence system’

While Europe has instituted a temporary and partial moratorium on neonicotinoids, the province of Ontario has become the first jurisdiction in North America to announce an impending regulation of neonicotinoid use.

In a press release this week the Ontario Beekeepers Association (OBA) wrote that over 4.2 million acres of land were planted with neonicotinoid adding, “100% of Ontario’s corn seed is now treated with neonicotinoids despite crop experts’ advice that only 10– 20% of corn acreage actually needs the insecticide”

“Bayer and Syngenta have built s $2.6 billion business by promoting the improper use of this insecticide as a preventative,” said Dan Davidson, OBA president in the release. “The only way to stop the cycle of overuse is to ban the sale of neonicotinoid treated seed.”

Ontario says its study may take some time and the OBA would like to see more immediate action.

The Pest Management Regulatory Agency (PMRA), the federal pesticide regulatory agency, is currently reviewing the registration of neonicotinoids in Canada. However they have stated that their review may not be completed until 2018. In the US, the EPA is on a similar track as Canada with no action likely before 2016

(with additional files from CBC)