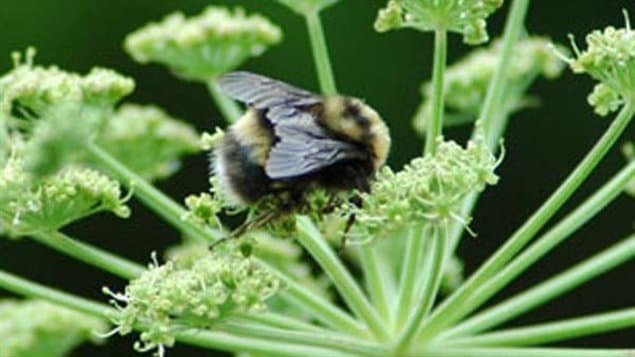 While domesticate honey bee losses are known, the loss of wild bees, even more important in pollination, is impossible to count. The Western Bumble bee, as with many wild bumble bees, used to be common across much of Canada but has undergone a mysterious and rapid decline, it too is now high on the list of concern and rated at Endangered
Photo Credit: Syd Cannings-COSEWIC

A typical winter loss in Canada is around 15%.

Paul Kozak, provincial apiarist for the Ministry of Agriculture and Rural Affairs. is quoted in the London Free Press saying, “It is the highest documented level of winter mortality that we have had in Ontario as a province”.

The report from the Canadian Association of Professional Apiarists (CAPA) says a long and harsh winter, mites, and the effects of pesticides from crops were factors in the extremely high mortality.

Only the western province of British Columbia reported a “typical” overwinter loss, whereas all other provinces had higher rates of loss of between 18 to 26 percent.

Several studies have shown that sub-lethal doses of pesticides, particularly neonicotinoids, used on food and flower crops adversely affect bee behaviour and weaken the colony’s ability to survive the winter. Ontario Beekeepers’ Association president Dan Davidson says bees’ exposure in the hive to pollen contaminated by pesticides “almost guarantees they will not survive the winter.”

Europe has put a two year moratorium on neonicotinoid use over concerns about its effect on bees. Most of the corn and soy crops in Canada use neonicotinoid pesticides. Ontario, a major corn producing province, is presently considering limitations to neonicotinoid use.

In a story cited by the Ontario Beekeepers Association, an American entomologist, Christian Krupke of Purdue University, says there may be little advantage to farmers using the neonicotinoid pesticides.  He says yield advantage is inconsistent at best.

Another American study from Pennsylvania State University found that slugs fed neonicotinoid-laced soybean material were unaffected, but farmer-friendly ground beetles which ate the harmful slugs died as a result.

Tracey Baute, an entomologist with Ontario’s agriculture ministry, speaking at a Guelph University forum said,  ““Make no mistake, things have to change and the Pest Management Regulatory Agency has been saying that for a year.  Current rates (of neonicotinoid seed treatments) are not sustainable,”