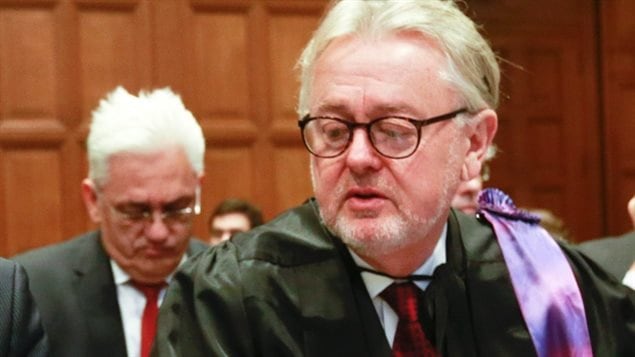 A Canadian law professor chosen to lead a United Nations commission inquiry looking into alleged war crimes in Gaza denies charges he is biased against Israel. A U-N watchdog group says William Schabas should withdraw from the commission because of something he wrote in a law journal.

He once wrote that Israeli Prime Minister Benjamin Netanyahu could be regarded as “the single individual most likely to threaten the survival of Israel.”

Schabas called the suggestion that he is biased absurd. “Like everybody inside and outside Israel, I disagree with people. Is everyone in Israel who has an opinion about Netanyahu anti-Israel?” He added he hoped both Israelis and Palestinians would cooperate with the investigation.

Schabas was one of three people named to the inquiry. Shortly after the announcement Canada’s Foreign Affairs Minister John Baird went on Twitter to denounce the appointments. “”UN Human Rights Council continues to be a sham for advancing human rights; today’s (announcement) for members of its Gaza inquiry reveals its agenda,” he tweeted.

He subsequently  added: “It’s an utter shame, and will do nothing to promote peace and dignity in Gaza for the Palestinian people.”

Baird and the current Canadian prime minister are staunch defenders of the Israeli state.