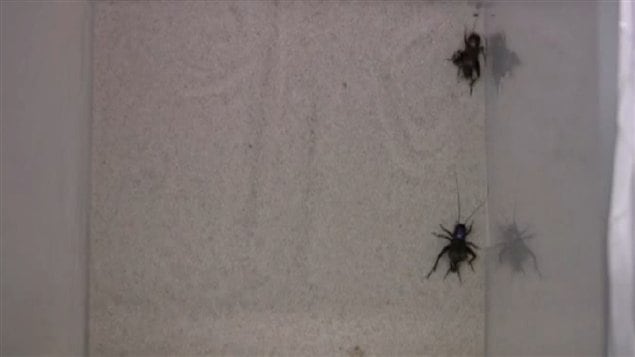 After a fight, the loser sulks away while the winning cricket chases it, dancing and singing loudly.
Photo Credit: Courtesy of Lauren Fitzsimmons

Just like us: Crickets will dance and brag after winning a fight

The short video is fascinating. Two male crickets are fighting, biting and pushing each other. After a final blow, the loser sulks away. The winning cricket on the other hand, brags, dances and sings loudly in victory.

The video is part of a study conducted by Ontario biologists Lauren Fitzsimmons and Susan Bertram which shows for the first time that these insects display similar actions as mammals, fish and birds, changing the winning behavior according to the audience.

“It’s a way of them broadcasting to [other males] to say ‘I’m tough, I just won a fight, you don’t want to mess with me.’” – biologist Lauren Fitzsimmons

The study was conducted with three different types of ‘cricket audience’: males, females and no crickets.

“They do seem to show off when others are around”, says Fitzsimmons, a Natural Sciences and Engineering Research Council postdoctoral research fellow at the University of Windsor.

“It’s a way of them broadcasting to [other males] to say ‘I’m tough, I just won a fight, you don’t want to mess with me.’”

If the audience is female, the cricket will also show off. Fitzsimmons suspects it is because females prefer dominant males.

“If they act like other animals do, then females would preferentially choose the winner of a fight to mate with… So that gives an extra incentive to the males to show off and to try to win the fight.

The research, Fitzsimmons says, demonstrates that crickets are possibly more complex than we give them credit for.

“[They] more like us, like vertebrae animals, [in] that they are able to detect when there are other around and modify their behaviour,” she says.

Fitzsimons adds that the next logical step is to study the audience’s behaviour to verify if they are paying attention, gathering information and modifying their future actions based on what they see.

The researcher also gets an audience

The results of the study were published in the journal Biology Letters. They also caught the attention of National Geographic.

“I was surprised and I was thrilled that they were interested and that it would get such a broad audience”, she says.

Just like the crickets she studies, Fitzsimmons is also happy to have an audience.

Lauren Fitzsimmons, a researcher at the University of Windsor, talks to Gilda Salomone about the brash behaviour of crickets.

National Geographic: Crickets Act Differently When Others Are Watching