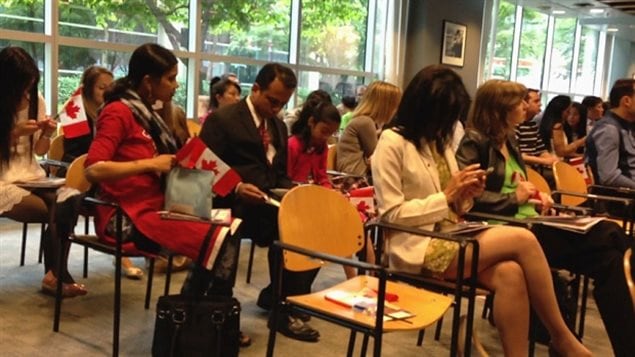 Immigrants who arrived in Canada in the last five years are now more likely to export beyond the traditional US market.
Photo Credit: CBC

The Conference Board of Canada conducted a study to measure the experience of recent immigrant-owned businesses, to see how many are exporting. And then to compare those results to other similar-sized businesses.

India and China now represent half the world’s economy

They looked into 15,000 small and medium-sized companies, and found that 12 per cent of immigrant-owned businesses export goods and services beyond the traditional US market, compared to 7 per cent of businesses owned by non-immigrants.

Danielle Goldfarb is the Associate Director of the Global Commerce Centre of the Conference Board of Canada.  She says Canada has a lot of immigrants from the economic powerhouses of China and India.  It is a given that exporting is crucial to improving Canada’s standard of living, and as Daneille Goldfarb explained in a recent interview with CBC, “We think immigrants are a good way for companies to connect back to trade opportunities in their countries of origin and we found it to be the case that they export more to non-US markets,

Most of the companies are found in Ontario and Quebec, and they are the fastest growing enterprises, but there some concerns.

It became apparent that many of these business owners do not have access to the kind of networks that could help them grow.  In a CBC TV interview, Danielle Goldfarb explained another issue;  “We really found that there were two groups of recent-immigrant owned businesses that exported – one of those groups was really wholesale or retail trade based, not doing very highly innovative stuff, competing on the basis of price.  These are likely to represent less long-term potential.

“There is another group and that group was much more innovation-based, doing much more research and development and that group represents a lot more potential for advancing Canada’s exports.”

The study suggests there is ample opportunity for Canadian policy-makers to address some of the issues and help to grow these businesses  Export promotion policies and policies that motivate financing of knowledge-intensive companies are among the recommendations coming out to the report.