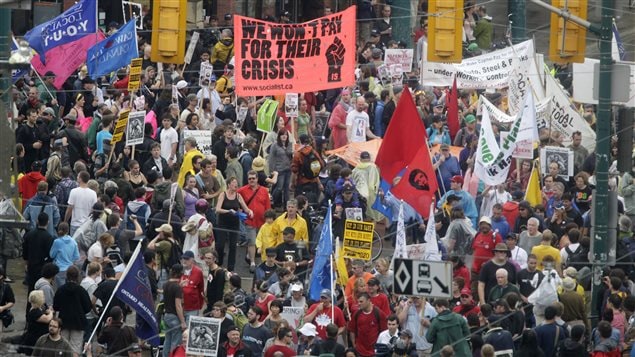 Legal battles stemming from confrontations between police and demonstrators four years ago during the Group-of-20 summit meeting in Toronto appear to be far from over.

The confrontations resulted in the largest number of mass arrests in Canadian history as crowds of up to 10,000 squared off against 20,000 police, military and security personnel.

Charges of police overreaction, unjustified arrests and protester violence have been flying back and fourth ever since.

In the latest turn, the Toronto Police Services Board said Thursday it will appeal a court decision earlier this month allowing two class-action lawsuits filed by hundreds of people detained during the summit to move ahead.

Saying that allegations of police mistreatment should be heard in court, the Divisional Court decision overturned a previous ruling that declined to certify the lawsuits.

Over 1,000 people were arrested in June, 2010. Nearly 800 were released without charges being filed. Many of those detained said they were simply innocent bystanders.

Protesters were demonstrating for and against various causes, including poverty and capitalism.

Demonstrations were generally peaceful, but some protesters–using black bloc tactics–caused an estimated $750,000 in damage to businesses in downtown Toronto.

There were no deaths, but 75 officers were injured. Three protesters reported injuries that they said were inflicted by police.