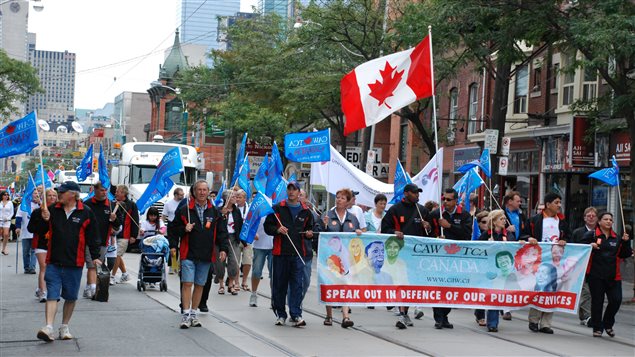 File photo of Toronto's 2011 Labour Day Parade. It's one of the largest of the many under way across the country today.
Photo Credit: CBC

Labour Day is a national holiday celebrating workers across the country.  It is also the unofficial end-of-summer.

In most provinces, students begin the new school year tomorrow, and all the routines will return to normal for many Canadian families.

The days are getting shorter, the leaves are just beginning to change colour in many regions, and some are even beginning to fall.  It is also the beginning of the harvest.

The annual Labour Day parade in Toronto, in support of worker’s rights, has a long and vivid history.  In 1872, Toronto printers staged a strike demanding a 9-hour work day, in their six-day week.  The march that began with 2,000 people, eventually brought 10,000 people out in support of the cause.

While the work-day remained the same, eventually the leaders arrested were freed, and the federal government passed the Trade Unions Act, allowing labour the right to organize for the first time in Canada.

There are some major labour conflicts making headlines this year. In British Columbia 40,000 public school teachers have been on strike in the province since June, and little progress has been made to get classrooms open again to students for this new school year.  Class composition, benefits and wages are the main issues.

In Quebec, the new Liberal government has vowed to tackle a $3 billion (Cdn) deficit and municipal workers in Montreal, including the police and fire-fighters are protesting changes being imposed on their pension plans.

And today, iron workers in the Alberta oil sands are protesting 344 temporary foreign workers brought from Italy to work on a construction site the iron workers say the Italians don’t have the necessary skills to work on safely.