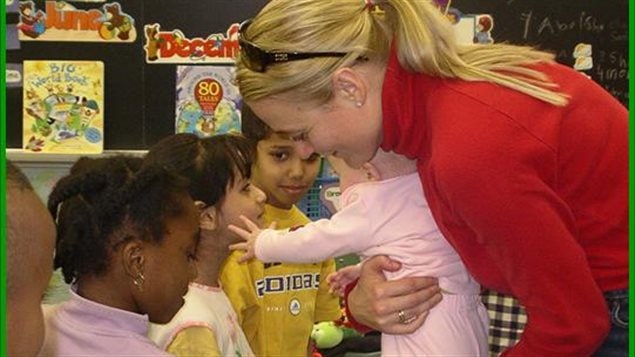 Babies, in the company of a parent and facilitator, visit classrooms regularly through the year to teach students about themselves and their feelings. The program has been proven to reduce aggression and bullying.
Photo Credit: courtesy of Roots of Empathy

Roots of Empathy programs are getting ready to welcome tiny visitors into classrooms around the world.  And by the end of this new school year, hundreds of thousands of students will understand themselves, and others, a little better.

The program is generally government funded and is part of a school year in elementary education, anywhere from kindergarten to grade eight, or from the ages of five, to twelve or thirteen.

It takes place in the classroom, with a baby of two to four months old, on a green blanket, that the parent and the students sit around, and watch, and talk. Over the nine visits during a school year, the students observe how much the baby changes and grows,

Mary Gordon is the social entrepreneur behind this idea, that is getting under way on three continents at the moment.  Her experience as a teacher provided a view, up close and personal, of the suffering and violence going on in many families.

In an effort to remedy and support people, she began by teaching a course in parenting and family literacy. Over the years her insights led her to the creation of Roots of Empathy.

‘You can’t put up a flash-card and teach empathy’

Mary Gordon explains the effect on students; “what happens is they hear what their friends think about feelings and they hear about what their friends worry about, and there’s a huge sense of building connection, one between the other.  And the classroom climate is tipped, as the teacher’s say, to being a more supportive learning environment.”

This success has caught the attention of several scholars and been the subject of randomized longitudinal studies many years after the program, that bear out the benefits of the improved capacity to “share and care and collaborate… are all very big twenty-first century values” according to Mary Gordon.

She says neuro-scientists say “the experiences around the green blanket are biologically embedded in the children’s brains, and that’s why these changes last.”

‘This ability of developing emotional literacy is a life-long gift to children.’

The program grew through word of mouth.  As Mary Gordon says, “teachers talk”. And as a result of the many successes, Mary Gordon been invited to speak before the OECD, the World Bank, the UN and the World Health Organization.  She was invited to consult with Nelson Mandela who understood that real change only happens through education.

Mary Gordon cautions the program must be invited for the right reason.  While she is currently in fruitful discussions with Chile, she has said no to China.  She says the Chileans understand the importance of the full engagement of the child, whereas for China the focus was only on a program to boost academic performance.

In Canada the program is funded at the provincial level. In one place it may be funded by the health ministry, in another it may be through child-abuse prevention programs.  In Alberta it was funded for a time through the department of Immigration, Employment and Industry, because the government felt the children, newly arrived in Canada, would get the extra support to adjust to life in this country.

Jeremy Rifkin has written about the program and it’s effectiveness in helping an economy to be able to deal with conflict.  Currently there is a study on the program under way in Northern Ireland, to measure its effectiveness on eight-year-old children in this post-troubled time.

Roots of Empathy is also widely available to First Nations, many of whom were victims of Canada’s own troubled past. After exposing the horrific abuses of more than a century of Residential Schools, when children as young as four and five were taken from their families and communities, institutionalized and punished for speaking their languages, Prime Minister Harper officially apologized,  Now the various tribes and communities are undergoing a Truth and Reconciliation process. A new education system will evolve out of the process, and in the meantime, both Phil Fontaine and Sean Atleo, former Chiefs of the Assembly of First Nations, have enthusiastically endorsed the program.

Perhaps Roots of Empathy is on the curriculum in a school near you.