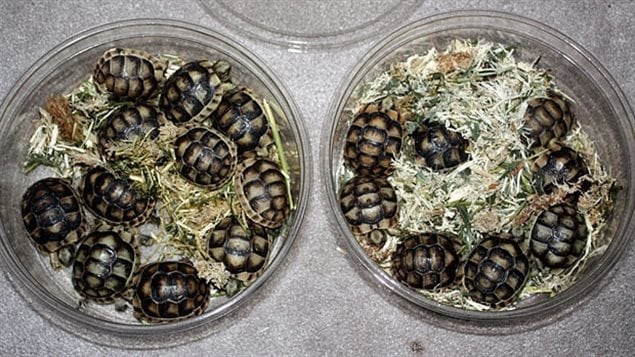 Another man was also charged in 2013 for allegedly attempting to smuggle 70 turtles and tortoises into Canada. The turtles above were found in that smuggling incident. Officers claimed they discovered two boxes containing live turtles and tortoises hidden within a storage compartment normally used for stowing a vehicle’s seats.
Photo Credit: Canadian Border Services Agency

A Canadian man has been charged by both Canadian and US officials in what may at first appear to be an unusual choice for smuggling.

US authorities have charged Kai Xu of Windsor, Ontario,  with smuggling goods, trade in endangered species and exporting wildlife,. He’s also facing Canadian charges of smuggling and failing to present an animal being brought into Canada

Its in connection with 51 turtles.

In August, the US Fish and Wildlife Service was notified by the UPS parcel delivery company in Detroit, Michigan about a package which had arrived by air from Alalabama labeled “live fish, keep cool”.

USFWS agents waited at the UPS depot in Detroit until a man picked up the box, then went to his vehicle where he put some things into small plastic bags. He then slipped between two large UPS trucks and emerged a few minutes later with “unusual bulges” in his sweat pants.

The man drove to the Canadian border where he was inspected and 51 turtles were found strapped to his legs.  These included a variety of Eastern box turtles, Red-eared sliders and Diamondback Terrapins.

Kai Wu could face up to 10 years in US prison on the charges for the August event.

However while awaiting a court hearing on those charges,he was involved in a similar incident just this week.

According to a separate criminal complaint, he drove back to Detroit on Wednesday.  He then met Lihua Lin, also a Canadian resident, and took him to the Detroit airport. Lin was to fly to China but when his baggage was examined, some 200 North American pond turtles were found. He has been charged with smuggling and trading in protected species.

Why turtles? Apparently there is big money potential.

The Ontario Ministry of Natural Resources have have stepped up enforcement over trade in endangered species and protected wildlife in the last decade.

“Right up there with trafficking with guns and drugs and people is wildlife,” said Ministry of Natural Resources intelligence and investigations specialist Victor Miller. “It’s lucrative.”

He added that some turtles can take a decade or two to reach sexual maturity, so losing a few females can devastate a population. “Our turtle populations can’t take any more pressure,” Marks said.

According to David Mifsud, a Michigan herpetologist, some species are valued as pets in Southeast Asia and can sell for up to $800 each.

In 2013  another Windsor man, Xin Hong Tong aged 22, was charged with making false statements, not reporting animals and attempting to avoid paying taxes and duties after Canadian border agents found over 70 lives turtles and tortoises hidden in his vehicle at the Detroit-Windsor border.

Lonny Koote, Environment Canada’s regional director for the wildlife enforcement directorate is reported to say that turtles smuggled across the U.S. border into Ontario are often destined for China.

Windsor naturalist Paul Pratt of the Ojibway Nature Centre  said of the international black market in turtles and wildlife,   “We’re more at risk because most of our natural areas are quite small. It’s not like we have endless wilderness … where if you take a couple turtles out you’re only taking a minuscule part of the population,” Pratt said. “One person can cause a local extinction.”