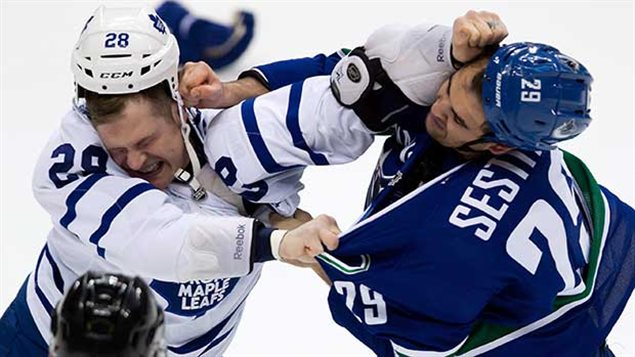 Time to end fighting in hockey

Two hockey players face off, gloves are dropped and they start fighting, sometimes resulting in serious injury.  This has long been common in the National Hockey League, the premier league in North America.

It seems however, that the NHL, or some teams at least- may be slowly easing away from this activity, still nonetheless very popular with crowds.

Peter Jaffe applauds that move. He is the Academic Director of the Centre for Research & Education on Violence against Women & Children at Western University’s Faculty of Education

Professor Jaffe said the recent decision by the Toronto Maple Leafs team to put two of their enforcers on waivers is a sign that at least some NHL teams are re-thinking the idea of “goons” or enforcers, whose primarily role is intimidation of other teams  through aggression.

In a story reported by Tim Whambsy of CBC sports about fighting in hockey following an NHL general managers (GM) meeting in November of 2013, there didn’t seem to be much priority given to the issue at the time.

“I’m okay with fighting, but I would like to see something done about goalie fighting,” Detroit Red Wings GM Ken Holland said.

“Minimal discussion,” was the response of another GM when asked how much fighting was debated (at the meeting)

Some young players with aspirations of entering the major leagues  think that fighting or other aggressive behaviour may be the pathway into a professional career.

In a University of Western Ontario press release, Professor Jaffe is quoted as saying, “We have to challenge the mindset of fighting not only in the NHL, but also in the training grounds of junior leagues where we have teenagers fighting each other as entertainment”.

He says by allowing fighting to continue, it glorifies the role of violence in sports. He points out that we are learning more and more about the lingering and serious effects of concussions, especially on young players whose brains and bodies are still developing.

He notes that when researchers examined the brain of an NHL enforcer who had died, they found serious damage from repeated blows to the head. Canadian Derek Boogaard had died at age 28 from an accidental drug and alcohol overdose while recovering from a concussion.

Professor Jaffe points out that there is no fighting allowed in Olympic hockey and several other jurisdictions as well, and if the NHL wanted it stopped, they could do so easily.

For those who say it’s a traditional part of the game, he says times change. Goalies once upon a time didn’t wear masks, players didn’t wear helmets. Making change is easy if the will is there, and he says it’s time to make that change for the current players, and for the younger ones coming up through the ranks

Recently both the Canadian Junior Hockey League and the US Hockey League have instituted new rules for the 2014-2015 season for fighting, involving longer penalties and including ejection from the game.