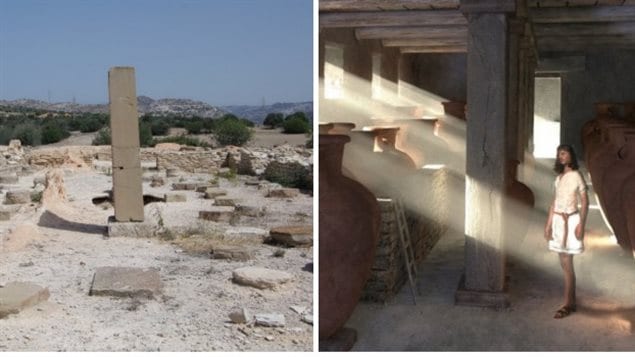 Actual view of the site, and on the right, how the app would turn that into a virtual recreation based on research and knowledge. Visitors would thus see remains of a column, a portion of walls and some square stones in orderly rows, while the app would transform that into the room as it was during the height of Cyprus’ international olive oil trade 3,200 years ago.
Photo Credit: UBC

Recreating cities from antiquity for your mobile device

Imagine visiting an ancient ruined city around the Mediterranean and seeing what it actually looked like, the exact rooms, buildings, and city itself when they were whole several thousand years ago.

An archaeology professor and tech team from the University of British Columbia is developing a smart phone app that will do just that. The virtual images will be developed from historical research.

Kevin Fisher is an assistant professor in Eastern Mediterranean Archaeology  in the Department of Classical, Near Eastern, and Religious Studies at UBC.

This initial technology involves an over 3,000 year old city on the island of Cyprus and the ancient ruins of Kalavasos-Ayios Dhimitrios.

The mobile device app is designed to provide an experience somewhat akin to Google street view, except that it would show not only exterior views but interior ones as well.

It would also have expert commentary about the site or specific location, e.g., room in a building.

“All of this enhances our ability to bring the past to life and tell the story of how people lived in the past and why archaeological sites are important cultural and educational resources.” Fisher

The eventual goal is to have people able to walk around a site aiming their device to see visualizations of its original state, and also those of chambers, tunnels rooms etc that are buried and as such not visible. Additional information would also be available on specific finds like tools, or vases.

Professor Fisher says, “Augmented reality is a relatively new technology but it has the potential to revolutionize the way people experience archaeological sites.”

He has partnered with a group of engineers at UBC’s Media and Graphics Interdisciplinary Centre (MAGIC), led by postdoctoral fellow Payam Rahmdel. In turn, the team partnered with nGRAIN, a Vancouver-based company that specializes in augmented reality, to work through the technological challenges of the iOS version of the app while Engineering Physics undergraduate student Afshin Haidari is working on the Android version while UBC student Lisa McLean is working on 3D models that will form the basis for some of the architectural visualizations.

“All of this enhances our ability to bring the past to life and tell the story of how people lived in the past and why archaeological sites are important cultural and educational resources.”

While initially the application will focus on one particular building, the hope is to eventually cover much of the site, and indeed expand the technology to cover other ancient sites of antiquity.

Professor Fisher says that by the end of the year a beta version of the app should be ready for trials.