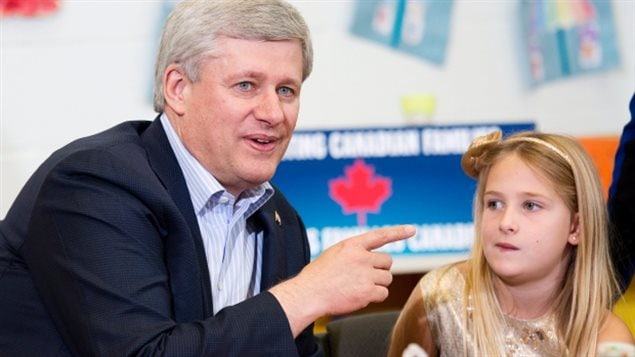 Prime Minister Stephen Harper does arts and crafts with a student at the Joseph and Wolf Lebovic Jewish Community Campus in Vaughan, Ont., on Thursday after announcing his government's income-splitting proposal.
Photo Credit: CP / Nathan Denette

Stephen Harper fulfilled a promise from his last campaign as he gets ready for the next.  On Thursday, the Prime Minister, with his wife Laureen beside him, announced “the family tax cut” surrounded by families in Vaughan, a well-heeled suburb of Toronto.

It’s an income splitting plan than is not garnering much support from the majority of Canadians, as it benefits only the wealthiest.  The plan allows the higher-income earner in a household to transfer up to C$50,000 of earned income to the lower-income earner, or stay-at-home partner.  Only families with children under 18 are eligible, and it caps out at a tax savings of C$2,000.

The Prime Minister did not ignore lower-income Canadians or single parents. For them he announced an increase to the universal child-care benefit and the child-care expense deduction.  As a result, families with children will save an average of $1,140 per year in taxes, according to the government.

Rick Smith, executive director of the Broadbent Institute, says the plan is “fundamentally unequal.” In an interview with CBC News Smith said”the greatest benefits would still go to the highest income earners with stay-at-home spouses, but would do little for low-income families” or single-parent families.

Liberal Leader Justin Trudeau questioned the move saying, “Middle-class families… should not have to pay more to give families like mine or Mr. Harper’s a $2,000 tax break.”

Professor Nelson Wiseman, Director of Canadian Studies at the University of Toronto, differs with those who say the election campaign has unofficially begun.  He says it has been ongoing since Justin Trudeau, a charismatic presence, became leader of the third-place Liberal party in April 2013.

The date for the next federal election in Canada is set for October 19, 2015.